After our long days of travel, we slept through until after midday so definitely missed breakfast that day. After showers and sorting our bags we ventured out for a walk around the neighbourhood, finding a basement supermarket to buy some water and seeking out somewhere for whatever meal it is that you have midafternoon and is your first of the day. We saw an ad for brunch at nearby hotel, only to discover that it was for Sunday but we stayed there anyway and enjoyed a Crab-tail and Tiger Prawn Lasagne that was like no other lasagne I had ever had: with layers of crispy pastry and what seemed like corn chips, and lots of lovely fresh vegetables all served in a deconstructed fashion. By then it had started to pour with rain so we stayed for a coffee before making our way back to our hotel (with a few wrong turns and coming to terms with the fact that there was no way we could understand any signs).

Our hotel is the Metropol and is well situated near the historic Old Town of Tallinn and close to the port in an area that was originally storehouses. The area is now seeing a resurgence in popularity with many warehouse conversions to accommodate the booming tourist trade that has accompanied Estonia’s independence from Russia. Across from us is an Architecture Museum and a tall brick chimney signals the presence of the “Scotland Yard” Pub. 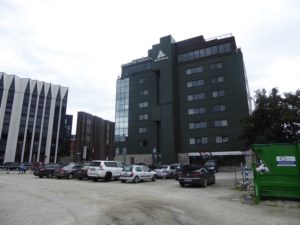 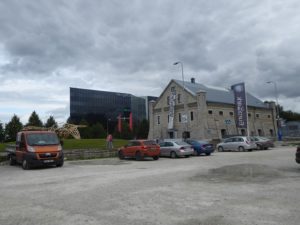 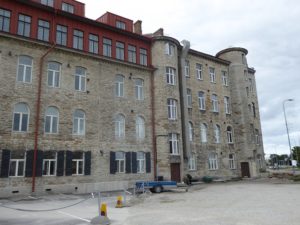 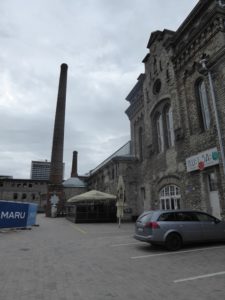 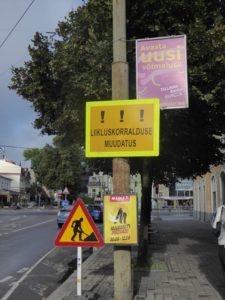 Tallinn is less than 100 km across the water from Finland and is a popular weekend destination for Finns. We also hear that it has become a popular destination for stag parties from many countries. Alcohol consumption figures suggest that Estonians have a major drinking problem but it can mostly be attributed to its visitors. We hope that we will not be encountering large drinking parties on our travels.

Another fun fact I had heard is that the country should be called “E-stonia” as it is one of the most digitally connected countries in the world.  It is often dubbed the Silicon Valley of Europe, has the highest number of startups per person in Europe and is the birthplace of many international companies – including Skype. It is also home to the NATO Cyber Defence Centre of Excellence.

At 7.00 that evening we meet up with most of our group: we are a total of 12 with our guide Ieva from Latvia. Most of the group are from the UK (Katie and Dermot; Mary, Adelina and Helen travelling together; Anne; and Lance);  Hans-Pieter and Lizbet from Denmark, and Victor from the US. Several people are missing their bags and hoping that they will be arriving tomorrow so that they can put on some clean clothes.

After the usual preliminaries and introductions, we head out into the Old Town area (the opposite direction from where we walked earlier) to Peppersack – a medieval restaurant in a building established in 1520 and named after its spice trader owner Hans Pepersack. Spice traders were often disparagingly called “pepper sacks” but Hans was not ashamed of his profession and adopted the jibe as his surname. The medieval theme came complete with costumed serving wenches and swashbuckling sword fights but we were in a back room so missed out on the main action. I tried a delicious local Honey Beer and Lady Margareta’s Weakness: breaded chicken fillet with sugar snap peas, rice and cheese sauce. 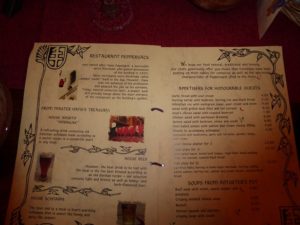 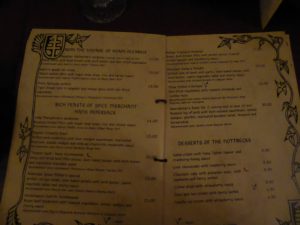 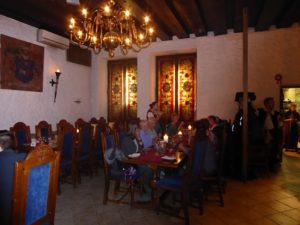 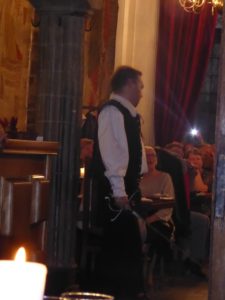 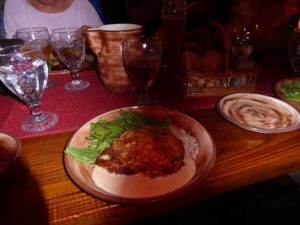