I’m starting today with trepidation, knowing that it will be a very, very long time before I get to see a bed again. Our flight doesn’t leave until 9.50pm. Air New Zealand NZ2 to London Heathrow has a flight time of 24 hours and 40 minutes! (with one stop in Los Angeles on the way). But our journey doesn’t stop there: we then transfer to Lufthansa to fly to Frankfurt and then finally on to our final destination: Tallinn, Estonia. Even flying backwards in time around the globe we won’t arrive until 2 days later. Thankfully we arrive in Estonia at night, will be met at the airport and can go straight to our hotel – and sleep!

Why on earth would we choose to put ourselves through this? I don’t think there is any easy way to travel that distance. I don’t have enough leave from work to extend the trip with stopovers along the way and we wanted to maximise the time we had at our destination. We did (briefly) look at flying business class but the $13,500 price tag for the flights put paid to that idea extremely quickly. Another option is to fly via an airport like Singapore that has a hotel integrated into the airport itself and find a flight schedule that allows you to book a room for 6-8 hours and get a sleep and a shower before you continue. 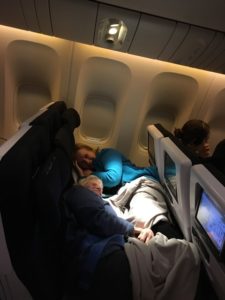 Then our travel agent suggested that we could try the Air New Zealand SkyCouch option. Certain planes on certain routes offer the SkyCouch – often referred to as Cuddle Class. It is in the economy cabin but you get 3 seats in a row where the seat cushion and foot rests fold out to form a flat couch. We essentially paid for the extra seat between us that at the very least gives us more space and guarantees that we won’t have to share with anyone else. It was relatively cost effective compared with business class and available flying to London via LA. We were prepared to have to take it in turns to sleep but were very pleased to find a configuration that worked for us and managed to sleep extremely well on both legs of the flight and arrived at Heathrow feeling quite perky considering the long flight time. Being able to lie down and get your feet up makes a big difference.

As I am preparing for departure, I look around my garden with regret at having to leave just as Spring is starting to bloom in the garden: freesias are in full force, daffodils are up, the magnolia buds are starting to open. I’m not sure that there is a perfect time to be away from the garden without missing something – except mid-winter perhaps but that often ends up being peak holiday season elsewhere. I had thought that this would be good because there is nothing much ready to harvest except for a few veggies that I’m happy to leave for friends and neighbours and I’ll be back before the main planting season. My kowhai tree died so I’ve had to replace it and it is too small to be producing flowers yet – so at least I won’t be missing all of the antics of the tuis as they swoop around the garden.

Spring flowers in bloom in my garden: 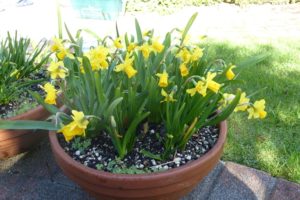 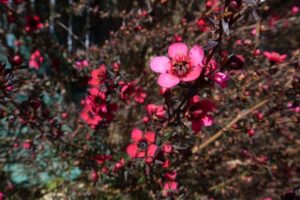 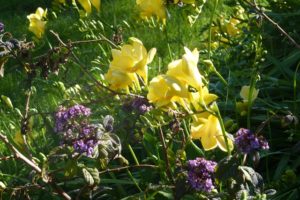 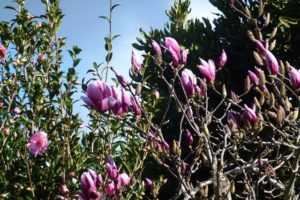 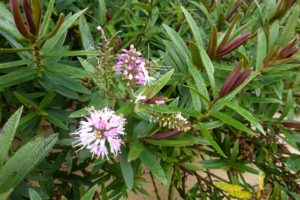