This morning we drove to Pushkin, named after the eminent author and home to his 19th century wooden house, 25km south of St Petersburg. Formerly ‘the Tsar’s Village’, the royal estates were built here, including the summer residence of Catherine the Great, a majestic palace styled in blue and gold rococo. The gold on the outside of the palace is just yellow paint because even Catherine decided that to have that painted in real gold might be a bit over the top! However the savings were just used to create opulence elsewhere. 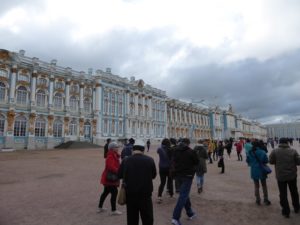 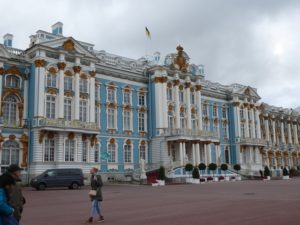 We thought that the palaces and cathedrals we had seen so far had been ‘a bit much’ in terms of the amount of gold ornamentation – well, they had nothing on Catherine the Great’s Palace! Especially the ballroom that was lavishly, extravagantly covered with gold – 24kg of gold. (No wonder the revolution happened!) The room was used for Catherine’s parties that were held every evening. You can apparently hire the room for functions now.

We had to put on overshoes at the entrance to protect the beautiful parquet floors. Although much of the palace was destroyed during the Nazi occupation, some treasures (including parts of floor) were secreted away to Siberia, and it was rebuilt after Great Patriotic War (WWII) to original plans. Catherine had had each room catalogued which certainly helped: black and white photos existed of each room. The Amber Room was totally ransacked as the Nazis considered the Prussian Amber was their heritage – the room was rebuilt by the Soviets at cost of millions of rubles. I found it intriguing that the Revolution happened at least in part in response to the outrageous wealth that was displayed and destroyed it but then the Soviets spent so much money on restoring many of the buildings to their original state. It was ‘for the people’ rather than for individuals but it still would have happened at the expense of things that would have benefited the people a lot more. Still, we can be very glad now that they restored them for us to enjoy.

You can see many of the rooms in the Summer Palace in the BBC’s recent version of War and Peace. 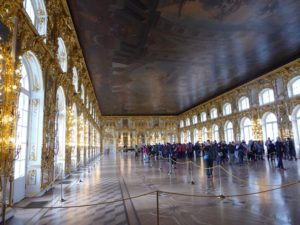 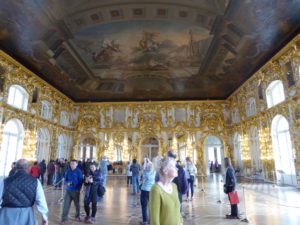 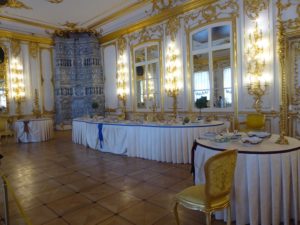 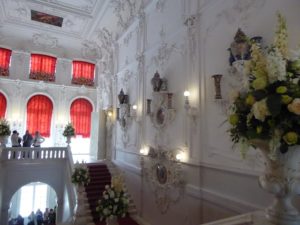 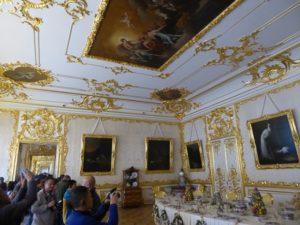 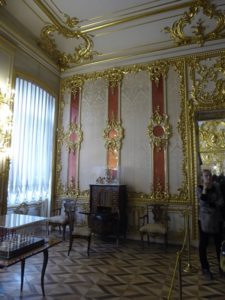 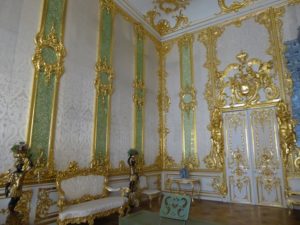 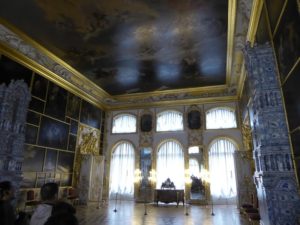 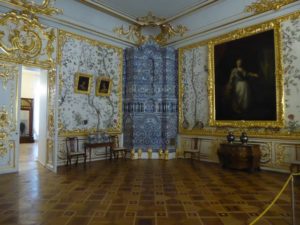 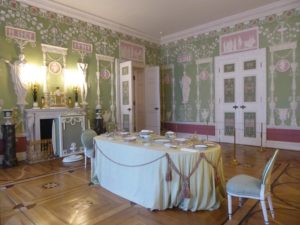 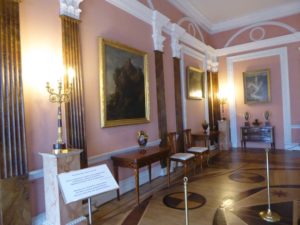 We heard today that the head of the Anti-Corruption Bureau was just arrested for corruption – 20 Billion Rubles in range of currencies were discovered at his house (and took all night to count)!!

After we exit the palace we walk through the gardens, with views of the Cameron Gallery, English gardens, and a range of pavilions around a huge lake (and even on an island in the middle – that is now used for concerts). We stop at one of the pavilions are treated to a performance by a quartet of singers – the building has magnificent acoustics. 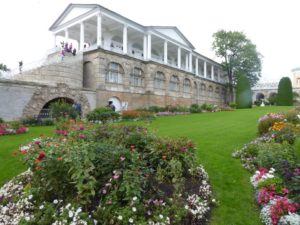 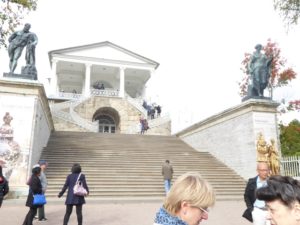 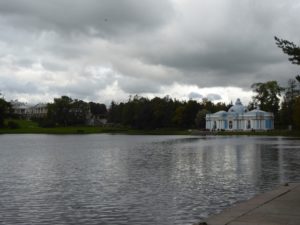 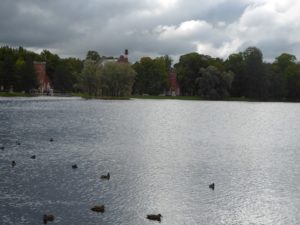 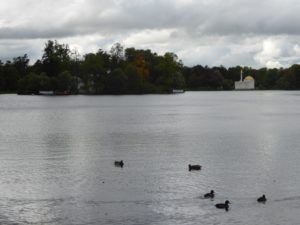 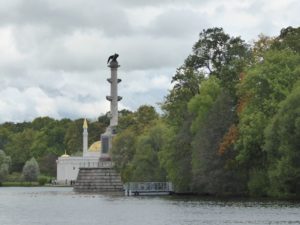 On our way to and from Pushkin, Natalya told us more about Russia and St Petersburg:

We have a free afternoon and some choose to visit art galleries and churches. Gill and I opt for lunch in the Galleria shopping centre and hope to do some last minute shopping for souvenir items to take home. However we discover that the massive shopping centre catered entirely for high-end clothes, shoes and jewellery, and there wasn’t a souvenir store, stationery or gift store of any nature to be found there. Thanks to Katy’s discovery, Ieva and I both buy very reasonable ultra-light weight, water-resistant down jackets that are perfect for travelling as they pack down to almost nothing.

That evening Ieva has booked us all into a restaurant up on the roof of a building, with views of the city, for our final dinner together.