Following a recent conference I took the opportunity to do an Adelaide Walking Tour that explored the early grand mansions and subdivisions of north Adelaide. I love to go on guided walking tours to get insights into some of the quirkier aspects of the history and culture of a city, along with tales of the exploits of its inhabitants that you don’t get through just looking at the key buildings and monuments yourself.

I discovered Down to Earth Tours run by Graeme Fanning. Graeme offers six different walking tours lasting about 2 hours and exploring different parts of Adelaide; he is extremely knowledgeable and passionate about Adelaide and has many stories to tell about its heritage (including snippets of information that he picks up from talking to locals even as he is showing us around). The tours can be booked directly through Down to Earth Tours or through Trip Advisor.

My friend Claire and I chose the Grand Mansions and Subdivisions Tour as it would give us a chance to see a part of Adelaide we hadn’t seen before and get more insights into the lives of people as opposed to the public institutions, statues and monuments of the central city. This was a fortuitous choice as it turned out because North Terrace (where the Cultural Caper Tour goes) was undergoing a lot of road works at the time and wasn’t pleasant walking – maybe next time?

The walk starts at The Curious Squire where we hear about the early history and colonial development of Adelaide. Adelaide is one of a group of only four cities in the world that have been carefully planned following the same layout of a central city square, four complimenting city squares surrounding it and parklands area that embrace the city centre. The first city built with this pattern was Philadelphia in the US, later came Savannah, Adelaide and Christchurch (New Zealand). 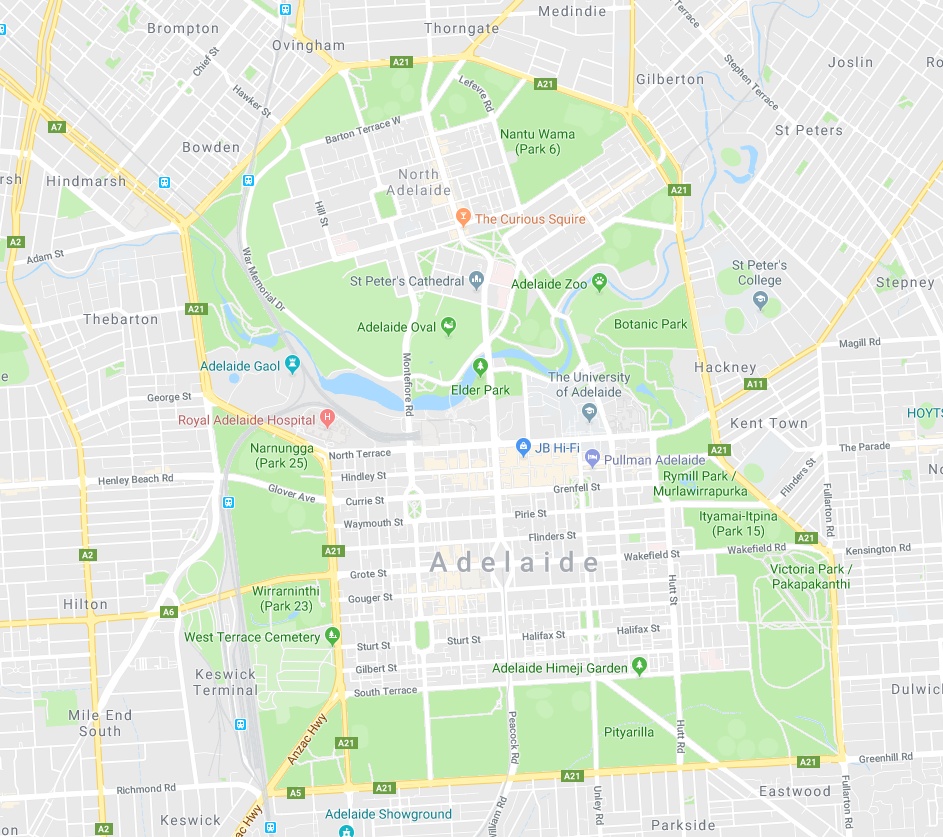 The city of Adelaide was founded in 1836 as the planned capital for a freely-settled British province and named in honour of Adelaide of Saxe-Meiningen, queen consort to King William IV. It differs from other Australian cities in that it does not share their convict settlement history. Colonel William Light, one of Adelaide’s founding fathers, designed the city and chose its location close to the River Torrens, in the area originally inhabited by the Kaurna people. Light’s design set out Adelaide in a grid layout, interspaced by wide boulevards and large public squares, and entirely surrounded by parklands. Early Adelaide was shaped by prosperity and wealth. It was also noted for early examples of religious freedom, a commitment to political progressivism and civil liberties. It has been known as the “City of Churches” since the mid-19th century, referring to its diversity of faiths rather than the piety of its inhabitants. 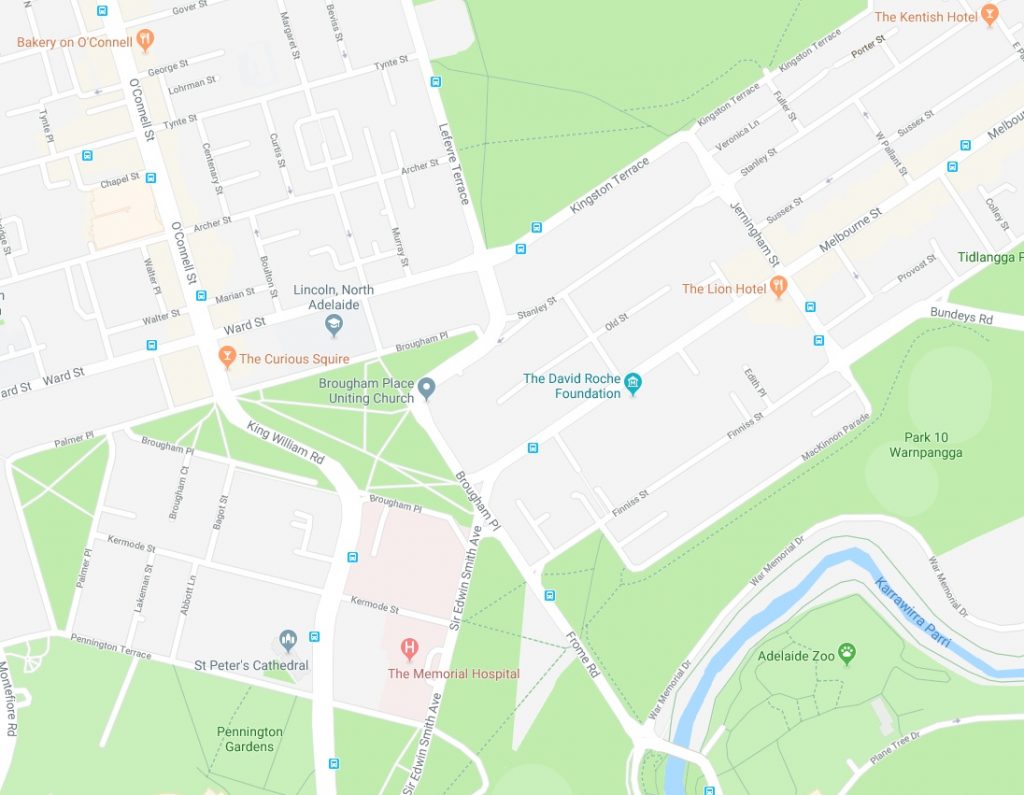 Map showing area of North Adelaide covered in the tour

We then set off along Brougham Place to view the Grand Mansions that look out over the park and city. The first four Mansions are state heritage-listed buildings, once the homes of prominent Australian pioneers, and now forming part of Lincoln College, a residential college affiliated with Adelaide University. 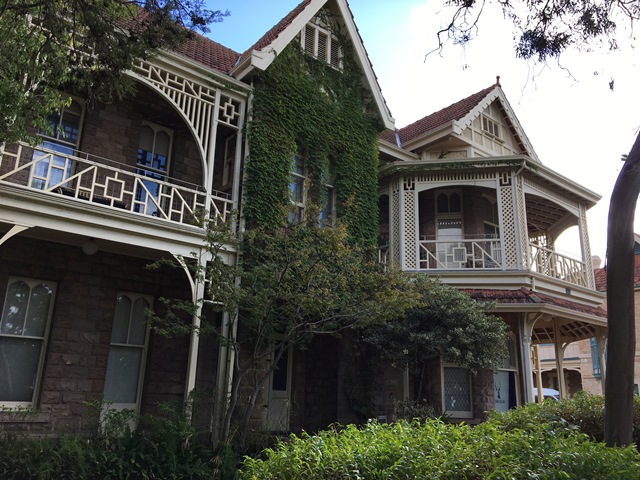 Number 45 Brougham Place is a grand residence, characteristic of the building styles of that part of North Adelaide. It was built in the late 1880s for wine and spirit merchant George Milne. Federation style houses are relatively rare in South Australia because, in the short period when they were popular, the central colony/state was less prosperous than its neighbours. They were different from those in the rest in Australia in having walls of stone instead of brick and strongly coloured rather than white paint on their woodwork. 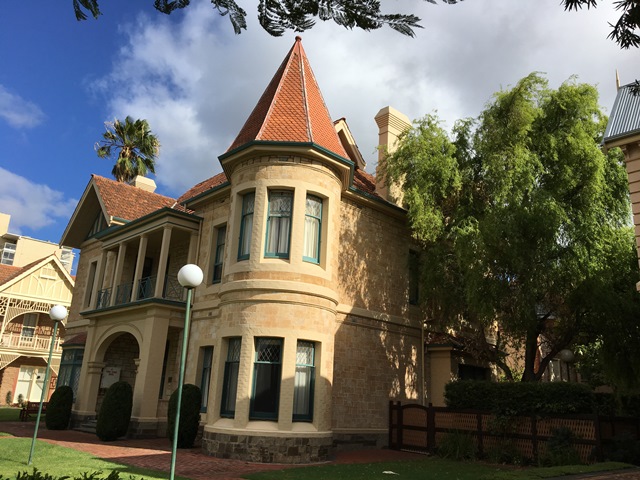 Number 39 Brougham Place (also known as Whitehead) built in 1907 was the home of A. G. Rymill, and also subsequently his son, long serving Adelaide City Councillor, Sir Arthur Campbell Rymill who was Mayor (1950 – 1954). This grand villa of sandstone with a fish scale tiled tower is typical of the grand residence of the Edwardian period. It is representative of the grand residential style of Brougham Terrace. 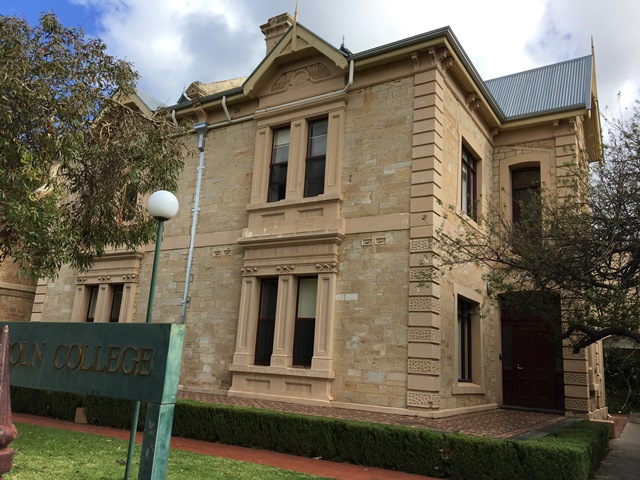 Abraham House (formerly known as Annexe due to its communication to the Federation building) underwent posthumous dedication to the late Samuel C E Abraham (Alumnus 1954-1958), a respected practitioner of Paediatrics both overseas and in Australia who champions such philanthropic projects as the Johor Baru Spastic Centre and the Sentul Project. 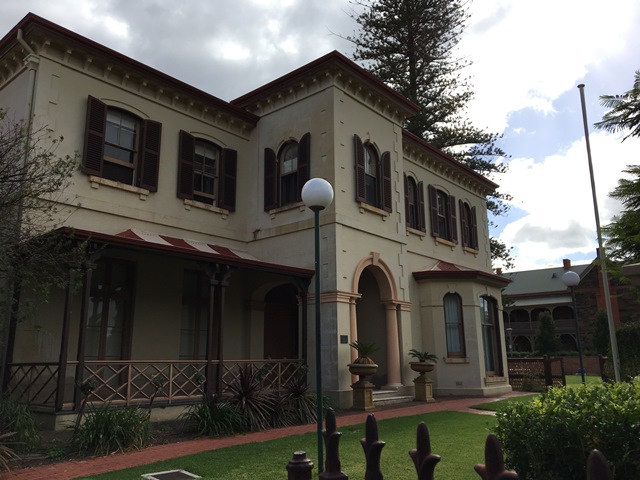 Number 32 Brougham Place is a mansion which is a former residence of Sir Richard Chaffey Baker who was a barrister, pastoralist and politician. Baker was the first South Australian born member of the colonial legislature, native born member of the legislative council, senator and the first President of the Australian Senate. He was knighted in 1895 and appointed Queen’s Counsel in 1900. Baker is regarded as one of the founding fathers of federation and was a member of the Federal Conventions of 1891 and 1897-1898. It remains a Heritage Listed Building of South Australia, of extreme historical value.

Further along Brougham St and on to Stanley St we get intriguing glimpses of more mansions (often with better views from the other side of the street) and fascinating stories of their former inhabitants who were key figures in Adelaide’s history. 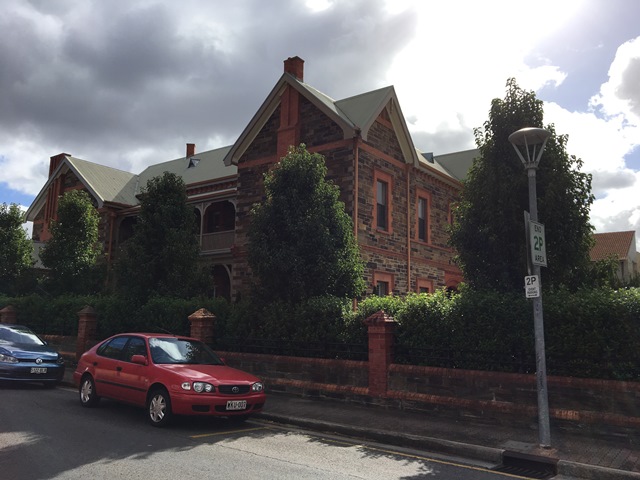 St Margaret’s. This impressive residence with coach house and walling was constructed in 1889-90 for the financier and developer Arthur Waterhouse. The buildings and walling are constructed of Tapley Hill bluestone with distinctive brick dressings. 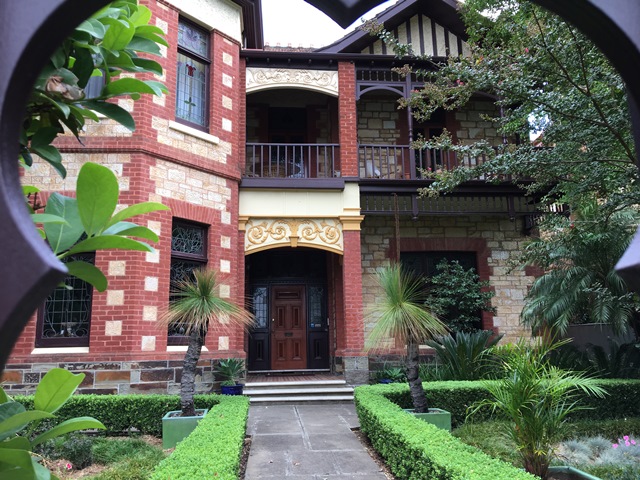 Taylor House was built around 1908-09 for W.D. Taylor, proprietor of the Lion Timber Mills. It was owned within the Taylor family until 1960 when it was purchased by the Adelaide Children’s Hospital.
The building demonstrates the transition from Victorian to Federation era architecture, with its elements of ‘Queen Anne’ style including the ornamental timber on the balcony. 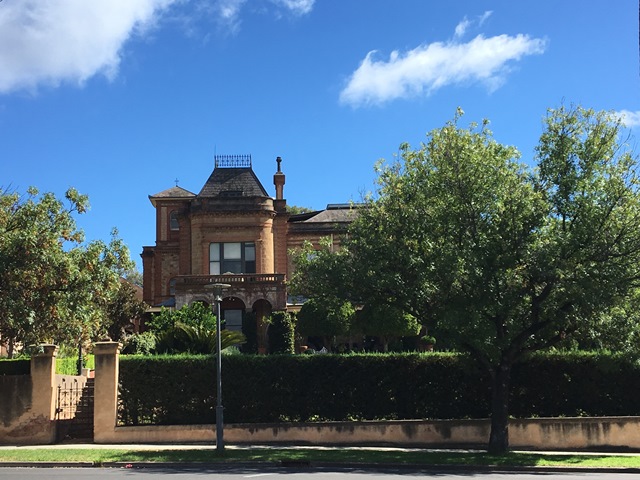 St Andrews is one of Adelaide’s grandest and most impressively sited residences comprising the original dwelling constructed in 1861-62 and a new wing built in about 1881. It was built by James MacGeorge for his own occupation. He was an architect of some note and had a sizeable practice embracing all the developed areas of the colony in the late 1850s. St Andrews is also significant for its association with David Murray one of Adelaide’s most successful merchants at the time of his purchasing it in 1880. Murray arrived in South Australia in 1853 and soon after began the drapery business of D & W Murray the firm expanding to become that of wholesale warehousing and shirt and boot making. Later offices were opened in London, Melbourne, Sydney, Brisbane, Launceston, Townsville, Rockhampton and Broken Hill. Murray also served as an MP for several years was a founder of the Adelaide YMCA donated money for a library at the SA School of Mines and Industries and all his prints and engravings to what is now the Art Gallery of South Australia. 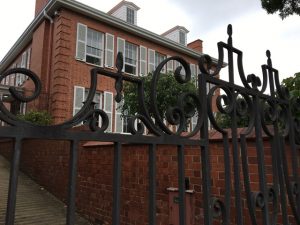 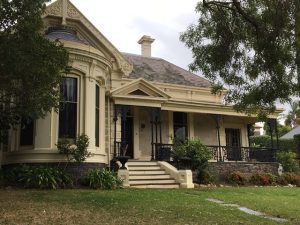 The elaborate boom-style architecture of this house reflects the almost immediate success as a manufacture of its owner, George E. Fulton, who arrived in the colony only a few years before the construction of the house in 1882. This house is one of the most intact and elaborate asymmetrical villas in the city. 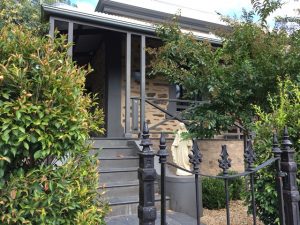 This bluestone house was constructed between 1901-1902 by builder Thomas Hitchings Trevaill together with the house to the north and three houses along Kingston Terrace, all on Town Acre 1031. The land was originally granted to the first Colonial Storekeeper and Postmaster, Thomas Gilbert. The house has also been used as a presbytery for the nearby St Mary’s Catholic Church. 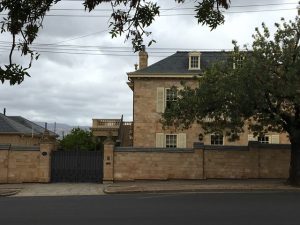 Sunnyside – Georgian revival style house designed by architect F. Kenneth Milne in 1936 for his own occupation. It won the Award of Merit of the South Australian Institute of Architects in 1944 for best domestic architecture of the period.

Then we continue further along to the Chichester Gardens Estate between Stanley, Melbourne & Jerningham Streets. There are lots of examples of early villas, cottages, semidetached and terraced houses. The terraced or row houses were built by benevolent societies for women with children who were widowed or deserted, the aged or infirm. Many of the cottages are now bed and breakfast accommodation. 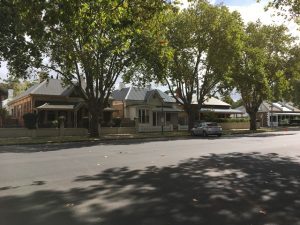 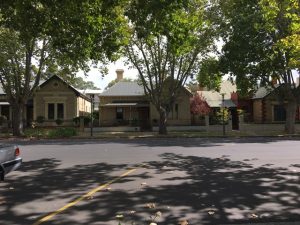 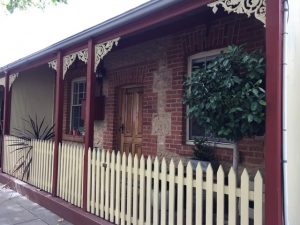 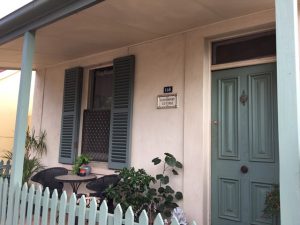 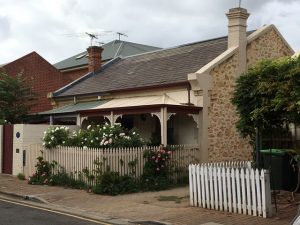 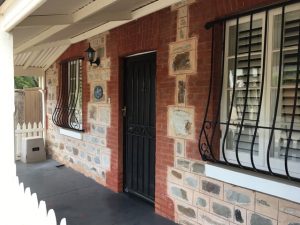 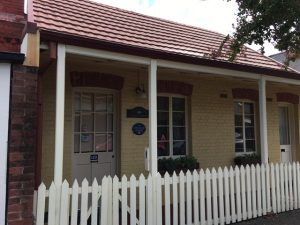 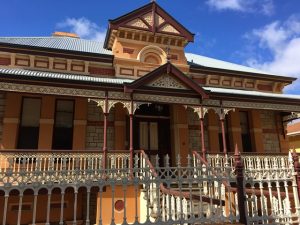 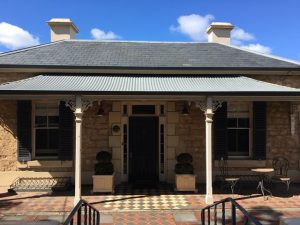 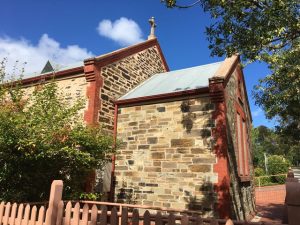 St Mary’s Catholic Church. Blessed Mother Mary MacKillop, co-founder of the Sisters of St Joseph opened a school here in Irishtown in 1870. In 1877 the present nave of the church was built as a school which also served the local community as a chapel on Sundays. The vestibule was added in 1899 and the rear sanctuary in 1905. 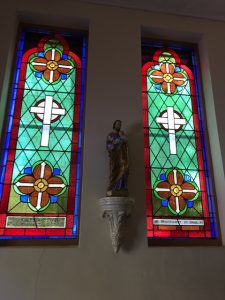 As well as the houses we also hear about some of the early shops and hotels including the former Baker’s shop (built in 1894, now the Store cafe), the Lion Hotel (built in 1881) and the site of the old Lion brewery and malthouse built in 1871. The final stop on our tour is the former Congregational Church, once described as a ‘resort for enquiring minds’. It was built in 1860, and 107ft tower added 10 years later – one of the most prominent townscape features of Adelaide. 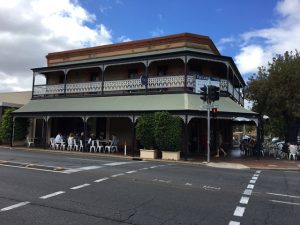 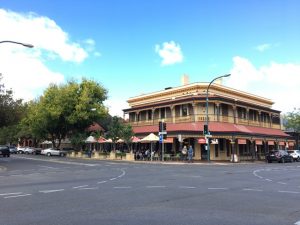 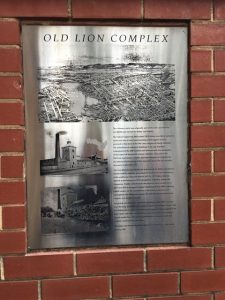 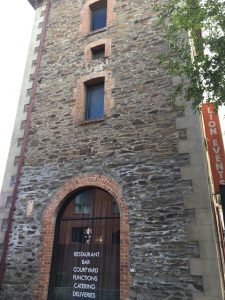 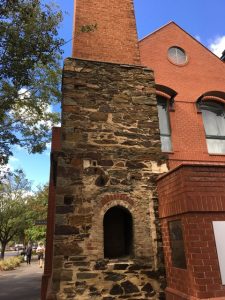 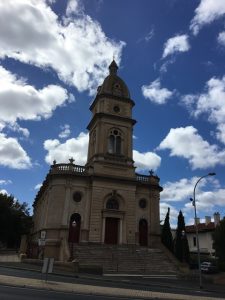