I have been writing a series of posts on walks using the new Shared Path system around the Waterview tunnel area that connects up different parks and green spaces. This post covers Volcanic Park to Volcano (Mt Roskill).

Valonia Reserve, at the southern end of Alan Wood Park, has a volcanic-themed skate park that is designed to resemble a lava flow. It starts at its highest point in a ‘crater’ before running through a series of lava-coloured terraces and skateable features such as bowls, banks, quarter pipes and rails. This time I was there early so there weren’t many people using it, but often when I go past there are lots of people of all different ages trying out their skateboards and other wheeled devices. 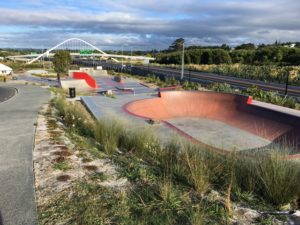 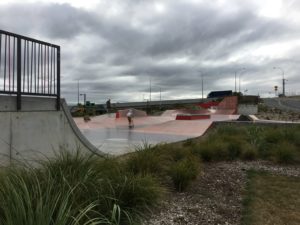 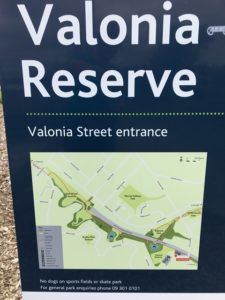 The Shared Path cycleway/walkway continues past the ‘Volcanic Park’ under the Richardson Road overbridge and alongside the Southwestern Motorway. This section, although newly completed is well constructed with noise baffling panels on one side and lots of native plantings on the other side. The motorway noise is just a hum in the background. At Maioro St interchange you have to go up and cross over at the traffic lights – well eventually you will but it was still being complete, I made a dash across the road as there weren’t many cars).

Heading down the other side you pass through masses of plantings of flaxes which is quite nice. But then it all becomes much less salubrious as there are no noise baffling panels and the motorway noise is quite loud (even on a quiet day), there are lots of weeds growing up through the plantings, and the track goes first past water collection ponds that were empty and then through a semi-industrial zone past the backs of factories and warehouses. It was all light and open and felt perfectly safe but it certainly wasn’t a pleasurable walk in that section. There is a walk bridge across the motorway that connects local residents with the supermarkets on the other side and I see a chap walking back with his shopping bags in hand.

But the main thing for me was that these Shared Paths are fulfilling their purpose of providing space for cyclists and pedestrians away from cars and making it much easier to connect up green spaces. Today I am heading to the volcanic cone of Mt Roskill within Winstone Park.  I have lived in the area for a very long time and I have never visited Mt Roskill before. The park itself is open and grassy with big established trees, and a road climbs around the mountain to the flat summit where there is a loop and parking area on top of a water reservoir tank. There is also a cross that is lit up at night: the Mt Roskill area used to be known as the ‘bible belt’ of Auckland but is now one of the most ethnically (and religiously) diverse areas.

Water collection ponds next to motorway

Looking back along route through industrial area

From the summit you get a great view and it is nice to be able to look out at the major volcanic cones of Auckland (rather than being on top of them). The city of Auckland is built on a volcanic field. There are 50 volcanoes within 20 kilometre radius of central Auckland, forming the hills, lakes and basins of the city. Each of the volcanoes (except for Rangitoto) erupted only once. Rangitoto Island was formed by the most recent volcanic eruption 600 years ago. Not all of the eruptions formed volcanic cones, some of the explosion craters formed lakes or basins, and over time many of the volcanic cones have been fully or partly quarried for scoria for building and roading so you can’t see 50 cones. But from the summit of Mt Roskill you still get a great view of Auckland’s twin harbours, the Skytower marking the CBD and most of the main cones in the volcanic field.

In my panorama photos I have labelled these volcanic cones to the best of my knowledge (but they are not all verified). I’ve used the anglicised names but there is a list below of the Maori names as well. A fantastic book if you want more information is “Volcanoes of Auckland: the Essential Guide” by Bruce W. Hayward, Graeme Murdoch and Gordon Maitland. 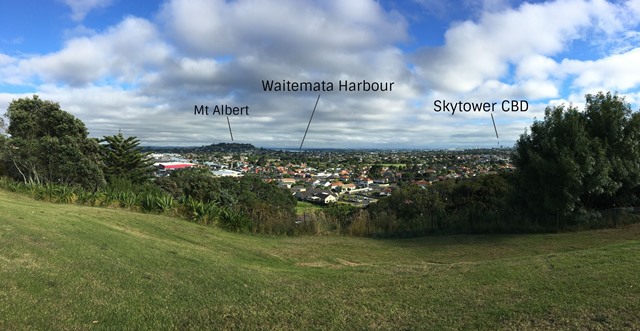 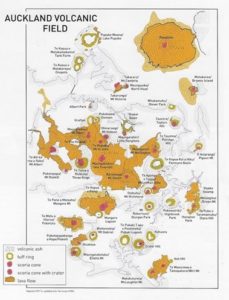 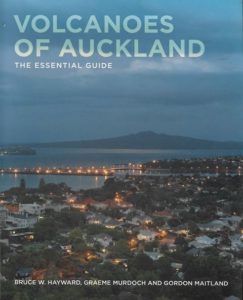