A jar of Figs in Ginger Syrup is wonderful to have in the pantry to bring out for winter desserts. Serve hot with custard, yoghurt or cream. I have previously made Figs in a Spiced Syrup but this is a nice variation with a zing of ginger. I really like ginger so will be tempted to add some more ginger to this recipe to really bring out the flavour and zing but that is not to everyone’s taste. You can easily halve or double this recipe depending on how many figs you have available.
Figs freeze well if you just put them whole in bags in the freezer. That way you can deal with the seasonal glut quickly and have fruit on hand later in the year when you have more time to do preserving. For this recipe I trimmed the stalks while the figs were still frozen and added all the ingredients into the pan together – it will take a while to thaw the figs and the sugar will have dissolved by the time the syrup comes to the boil. 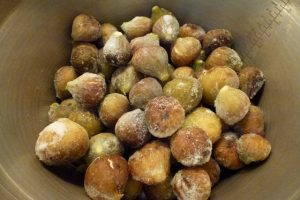 Method
Trim figs and cut in half if large. Combine sugar, lemons, water, vinegar and ginger in a large pot and bring to a boil, stirring until sugar has dissolved. Add figs and simmer gently until soft (3 hours). If you are starting with frozen figs, this time will be shorter.
Divide figs and syrup between sterilised preserving jars and seal. 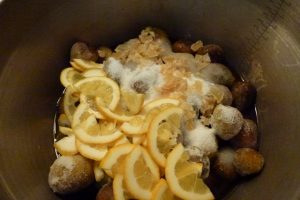 Put all ingredients in pan 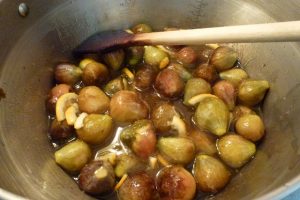 Stir until sugar is dissolved 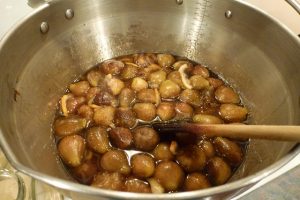 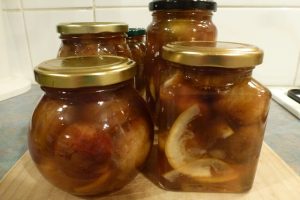 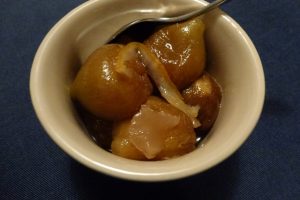 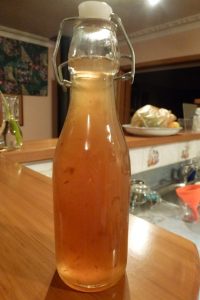 Don’t waste any left over ‘figgy syrup’ – serve it over icecream or with fruit and yoghurt; or put it in a nice jar as a gift.