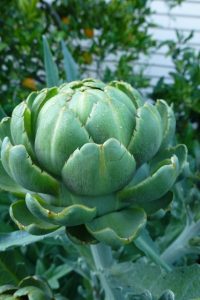 Globe artichokes are basically a giant thistle that comes originally from the Mediterranean area. They are one of the oldest cultivated vegetables in the world and were eaten by the early Greeks and Romans – although why you would think to try eating a thistle I don’t know. Still they must have been onto a good thing because artichokes have remained part of Mediterranean cuisine for thousands of years.

The edible portion of the plant is the young flower buds before they open up to become flowers, particularly the fleshy lower portions of the bracts (the green leafy scales) and the base under these bracts, known as the “heart”.

Globe artichokes are quite stunning ornamental plants as well as having culinary uses. This is probably just as well because they can become a large statement plant in their own right whether you intend them to be so or not. They like to have plenty of sun, well-drained soil with lots of organic matter and regular water during summer.  The artichoke buds should be picked from mid spring through to mid summer when they are young and fresh with firm green leaves or bracts.

They are rather too easy to grow, I find, and can grow extremely large. When you buy a seedling from the garden centre it is deceptively small. I put one in the midst of all my other veggies but it rapidly outgrew everything else, with its large leaves covering everything around it. I regularly had to remove leaves to try to stop it taking over completely. Next time I tried putting it at the back of the garden bed where it was more shaded to try to stunt its growth a bit – with no luck. After trying a few different places I decided to give them their own bed in a less sunny part of the garden with a lot more room to spread and they did quite well. Artichokes will multiply naturally over time (although mine turned up their toes in the second year in that spot). 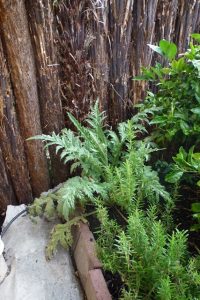 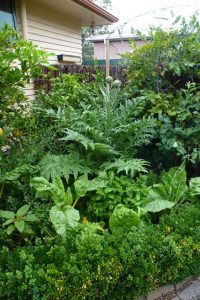 but soon dominate the garden 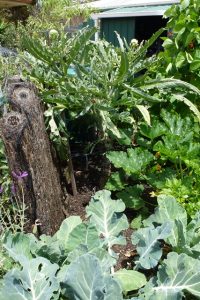 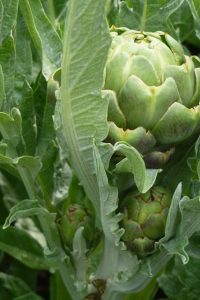 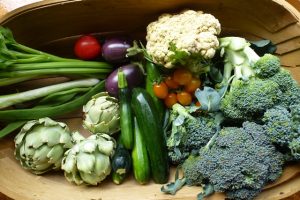 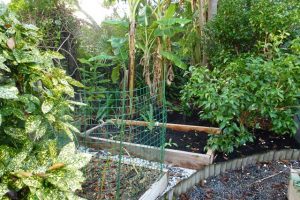 The simplest way to prepare artichokes is to cut off the buds leaving about an inch of stem and then plunge them in boiling water until they are tender. Then you can easily peel away the bracts and access the ‘heart’ underneath. There is a mass of immature florets in the middle of the bud/heart called the “choke” – these are inedible in older, larger flowers and need to be removed. 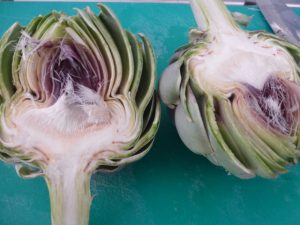 Bud cut in half 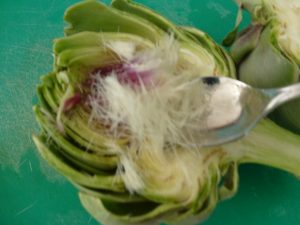 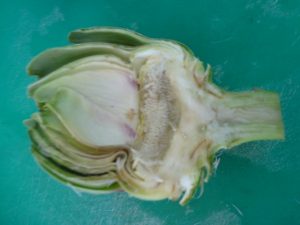 My friend Dominique is from France and always grows artichokes. She raves over them and always talks about the fleshy bracts being heavenly. You can use them to scoop up a dip of your choice and then draw down your teeth to squeeze out the fleshy base into your mouth. I still don’t quite understand this fascination and it seems like it is just an excuse to eat whatever the dip is. But the heart – that I can understand! Once you have peeled away the bracts to leave the heart and have scooped out the choke if required, you are left with a delicious fleshy vegetable that can sliced into salads or added to dishes like Fennel & Potato Bake.

You can prepare the artichokes before cooking them but you need to have a bowl of water with lemon juice in it ready to put them into as they can discolour quickly once sliced. Pull off the outer layer of leaves/bracts. Use a knife to peel away the dark green skin around the base and stem. Cut them in half lengthways so you can see and scrape out the hairy choke and any tougher parts of the bud (if the buds are small you may not need to remove anything). Then they are ready to use however you want: stuffed, roasted, marinated, or added to pasta, risotto and salads. Boil them for 10-15 mins before using them in cooked dishes or thinly slice and serve them raw. 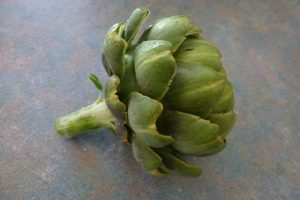 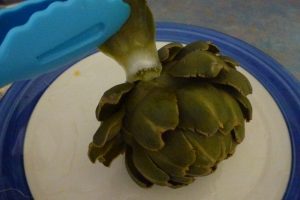 Boil until soft and can easily pull apart 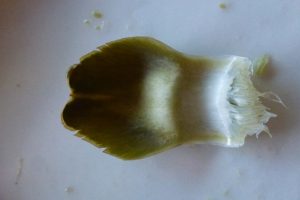 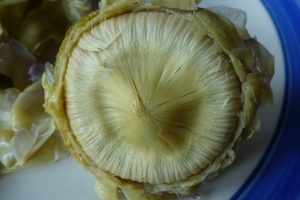 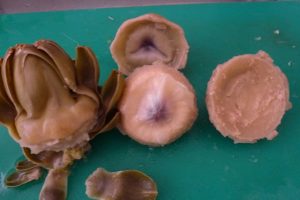 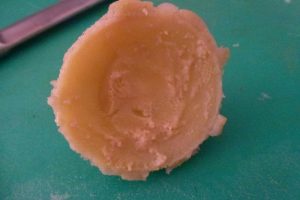 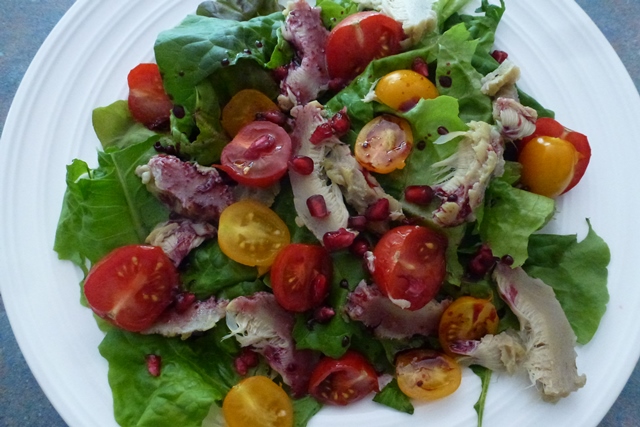 Use sliced artichoke hearts in salads