I have become quite partial to drinking Campari and soda since being introduced to it by my godmother when I visited her in the UK. During lockdown it became very difficult to obtain in New Zealand so I decided that I’d have to have a go at making it myself – this is my homemade Campari recipe.

Campari is a dark red Italian alcoholic liqueur, used as an apéritif or as a bitters (digestif). It was invented in 1860 by Gaspare Campari. The recipe contains more than 60 natural ingredients including herbs, spices, barks and fruit peels infused in alcohol – and is kept as a trade secret. The distinctive red colour originally came from carmine dye, made from crushed cochineal insects – but carmine is no longer used.

As the campari recipe is a trade secret it is obviously impossible to find out exactly how to make it but you can find lots of different recipes that people have tried (with varying degrees of success). I investigated the various reported ingredients and what their purpose was in the recipe – as a bittering or flavouring agent – as well as the proportions used. I was very grateful for the lessons I had learned in the Gin Immersion Workshop I attended that helped me understand a bit more how to go about this. Many of the ingredients were not available in NZ so I tried to find equivalent ingredients that I could use instead and I adjusted the proportions of the different ingredients (whilst keeping the overall amounts in each category much the same) to match the quantities that they were available in (taking price into account as well). I got my ingredients from Alembics and Cottage Hill Herbs.

I certainly didn’t get anywhere near 60 ingredients but you could add smaller amounts of a range of different herbs. Cloves, majoram, sage, thyme and rosemary were often reported. Although Rhubarb Root was apparently quite important, I was unable to source this in NZ. It’s use was to provide depth and layers of complexity of flavour so I hoped that these would be adequately provided via other ingredients.

I used a reasonable amount of liquorice/aniseed flavours in my recipe (because I really like them and because I already had the ingredients). The result ended up being a bit of a cross between Campari and Ouzo – which I quite like and would make again. It certainly has the right level of bitterness and gives a decent nod to Campari but has a softer sweeter aniseed aftertaste. You could obviously reduce the quantities if you preferred.

Most of the recipes I saw used 100-150 proof neutral grain spirits, which they said was important to properly extract the flavours. However it is difficult to get high proof alcohol in NZ so, given that I had had good success with using vodka for my infusions in making homemade gin, I decided to give it a go. 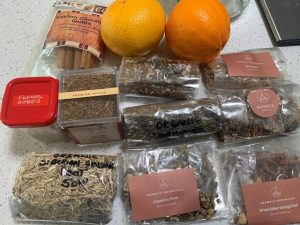 Put all of the herbs together with the vodka in a large glass jar and leave to steep for 3-4 weeks in a cool dark place.

Pour infused alcohol into a jug through a cheese-cloth lined sieve to remove the herbs.

Heat the sugar and water until the sugar has completely dissolved and the liquid is clear. Cool and then add to the alcohol infusion. You may wish to add more sugar syrup if it is still too bitter for your taste.

Add a few drops of food colouring to get the desired colour – I used about 10 drops.

Pour into bottles of your choice. 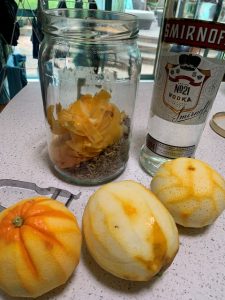 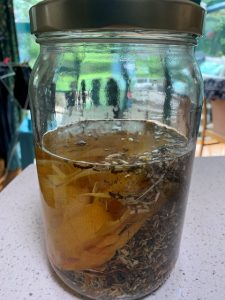 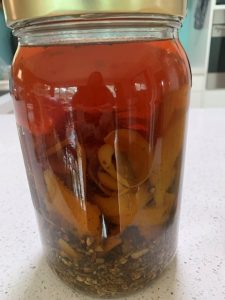 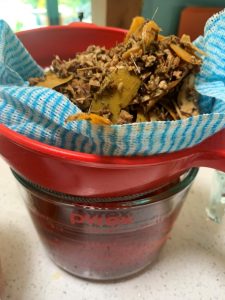 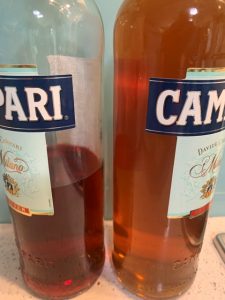 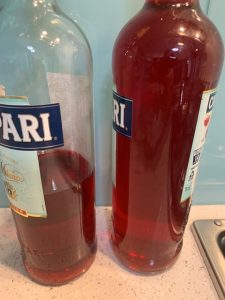 I am eagerly awaiting the arrival of my new alembic still that has now apparently finally arrived in the country. Once I have it set up and figured out how to use it, I think I will try making this recipe again using the still to see whether different flavours are extracted through the distillation process compared with the infusion.