Two iconic ‘must-do’ things in Hobart are the famous Salamanca Market and the relatively new but quickly (in)famous MONA – described by its owner as a ‘subversive adult Disneyland’.

I hadn’t been to Hobart for 20 years and took the opportunity at the end of a work trip to spend a weekend there visiting Anne, who I met on my trip to Mexico, Guatemala and Belize.

The Salamanca Market operates every Saturday and is located down on the Hobart waterfront in Salamanca Place. It is a beautiful location with the historic sandstone warehouses on one side and lawns and trees looking down to the harbour on the other. The harbour houses working fishing boats, cruising yachts and even some old-fashioned sailing vessels – you could spend hours with a coffee just watching all the comings and goings. 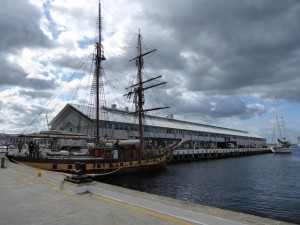 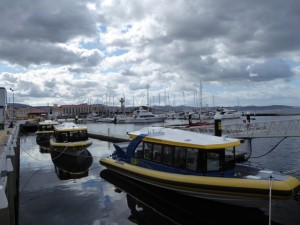 The market is a great mix of fruits and vegetables, foods and drinks, and all manner of crafts from Tasmanian timbers to weird and wacky knick-knacks.  We spent quite some time talking with the owner of a stall that specialised in making humorous characters out of metal junk. 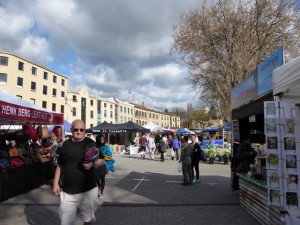 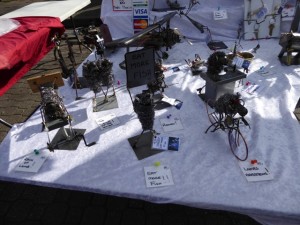 When I said I was going to Hobart, many many people asked if I was going to MONA. They told me it was an experience that shouldn’t be missed, but also not to be surprised if I didn’t like much of it – it would be thought provoking.  I was intrigued. Just exactly was it that I was going to be seeing? A little bit of a hint came when we saw the ferries that would take us 25 minutes up the Derwent River to MONA: painted in ‘camouflage’ designs; with ‘sheep seats’ on the back deck; and as we entered, signs to the ‘Posh Pit’ where you could pay double the price for comfy seats, and lots of food and drink. 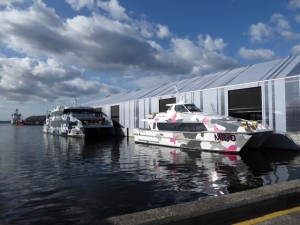 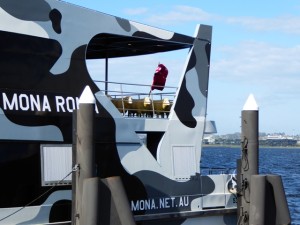 Quiet in the ‘Sheep Seats’? 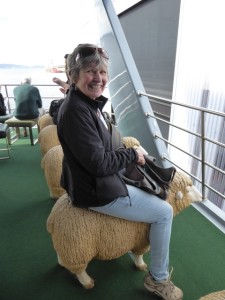 MONA is a privately owned museum and is arguably one of the most controversial private collections of modern art and antiquities in the world.  The museum is owned by millionaire David Walsh.  I am told that he made his millions from gambling at the Casino and (having not paid any taxes on his ‘earnings’) that the Tasmanian government weren’t too keen on helping out with costs of running the museum.  Apparently the operational costs are underpinned by the winery, brewery, restaurant and hotel on the same site.  The museum hosts a range of different exhibitions and also two festivals of music and art: MOFO and Dark MOFO.

The ferry trip up the river is beautiful and worth it just for the views of the harbour and surrounds. Mt Wellington soars above Hobart, its peaks still covered in snow. 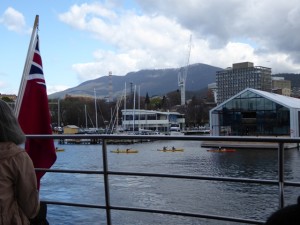 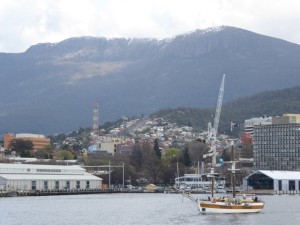 On the way up the Derwent River we pass under the Tasman Bridge and hear about the disaster that happened in 1975 when a bulk ore carrier travelling up the river collided with several pylons of the bridge causing a large section of the bridge deck to collapse onto the ship and into the river below, killing 12 people. But today there is no sign of that disaster – just a great photo opportunity. 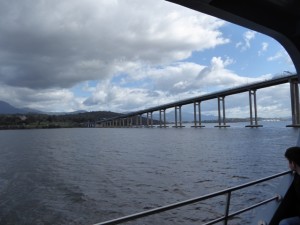 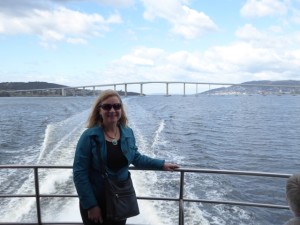 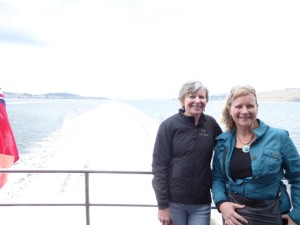 As we head up the river, we see the first signs of MONA: a strange rusty looking facade on a promontory. The ferry pulls up alongside the jetty and we are told that we must walk up the 100 steps ahead of us (there is a lift but you must have a good excuse!).  At the top we reach a plateau and are greeted by a (larger than) life-size model of a concrete mixer crafted out of rusted filigree steel.  We look around, not quite sure what we are supposed to do next.  Then we spy a mirrored box and go to investigate. Eventually a set of doors slides open and we realise it is the entrance to the museum. 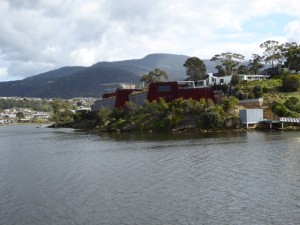 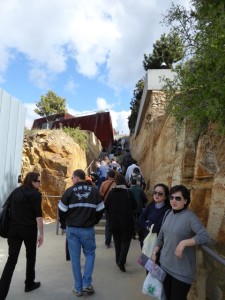 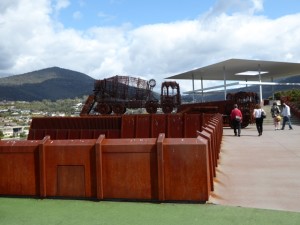 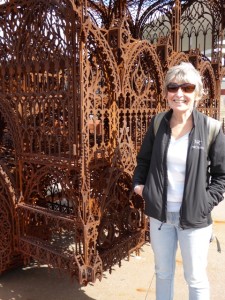 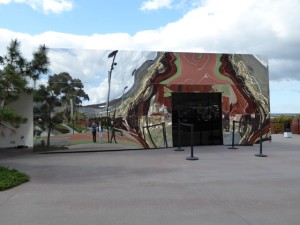 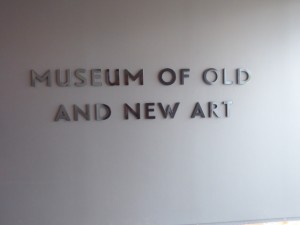 The museum “takes up three floors within a subterranean architectural masterpiece and is guaranteed to impress”. You start your tour from the bottom.  We took the lift as it happened to be there as we went past and a journey into the earth in a clear glass circular lift seemed like an experience in itself.  At the bottom you arrive at ‘The Void’ – the museum bar – set up against towering walls of beautiful sandstone. There is a ‘Cinemona’ there also but was already in session. There is no signage on anything but you are given an iPod that senses what is nearby and presents information to you.  We walk along a ‘hallway’ listening to a sound track of various artists contemplating death! Ahead of us is a giant ‘waterfall’ which has the ‘showerheads’ programmed to produce words using the falling water.  It is spectacular but again the words seem to have a very sinister theme. 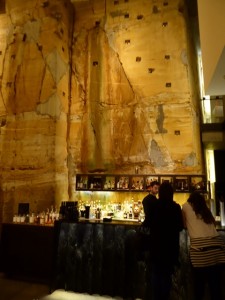 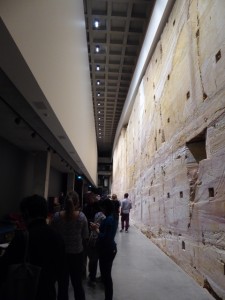 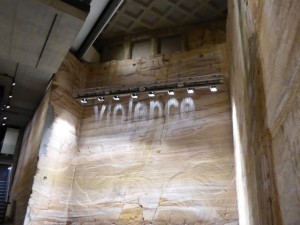 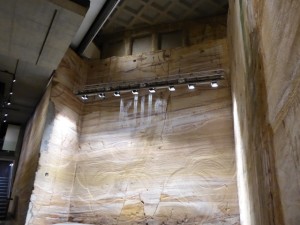 We could hear lots of screaming and were very uncertain about what we were going to encounter as we passed through a very bizarre (from my perspective at least) exhibition of video art that included numerous ‘videos’ in which nothing at all happened but that went on for hours.  Eventually we discovered the source of the screaming: a video which was filmed at the site of the painting of ‘The Scream’ where a large picture frame had been placed and passersby invited to ‘stand in the picture’ and scream!

The top two floors of the museum were interlinked vertically and really showed off the amazing architecture of the space: tunnels to round rooms; stairs up and down; bridges over the exhibits below. The exhibits themselves covered everything from giant ‘Hogwarts’-like dining halls to Egyptian mummies to a skull encrusted with beetle carcasses and a taxidermied bird in its mouth to interactive ‘energy’ displays.  My personal favourite was the ‘Affectionate Couch’: a fluffy sofa that made noises when you sat on it – a bark when we first sat down, growling or purring as we wriggled, and more excited barking as we bounced. 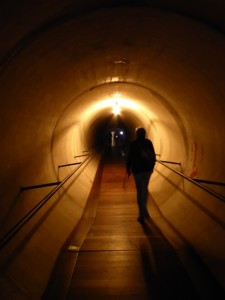 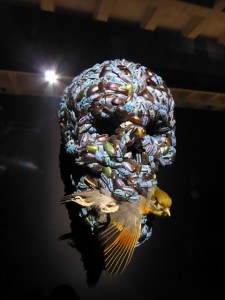 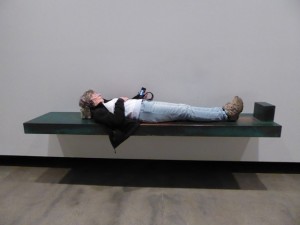 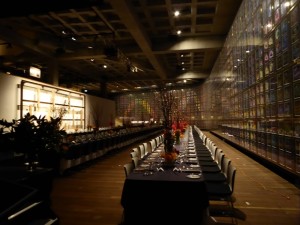 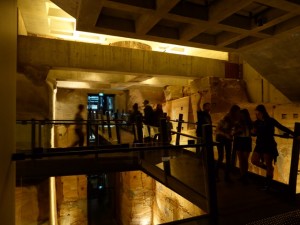 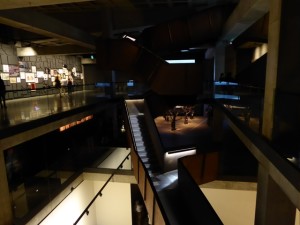 The art may not be to your taste but the building itself is definitely a “subterranean architectural masterpiece” and is an experience not to be missed.