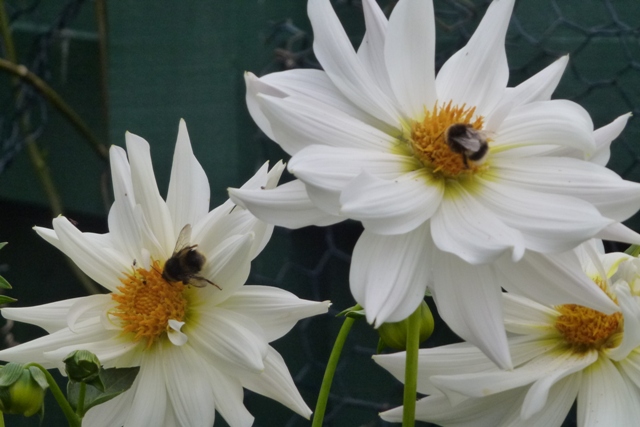 Single dahlias are a bumblebee favourite

Bumblebees don’t have hives like honey bees but create a new nest each year. Mated females hibernate through the winter in a suitable overwintering hole such as in a hole in a dirt bank. In the spring they emerge and spend some time searching around for a suitable site to establish a new nest: this might be an abandoned rodent hole, or a dense low shrub. Once the queen has found the nest site, she will build inside it a small “honey pot” out of wax, which she exudes from her abdomen. She then visits flowers to collect nectar to fill the honey pot, and collects pollen mixed with nectar to make small balls as a food store for her young.

The queen bumblebee lays a group of fertilised eggs on the pollen balls and broods over to keep them warm, maintaining the nest’s temperature at around 30˚C. During this time she still makes short trips outside to continue to collect pollen and nectar. Once the eggs have hatched the larvae eat the pollen balls provided. Pollen is high in protein, which is necessary for the larvae to grow and develop and eventually pupate. Approximately 2 weeks later the adult workers emerge. After a few days workers take over the brooding and eventually the foraging duties from the queen, who focuses on laying more worker eggs. She will stay within the nest from now on. The nest continues to develop, and can vary in size from 80 to 400 individuals at its peak. Initial workers are small, but future adults will increase in size as the nest becomes stronger and more resources can be devoted to their development. 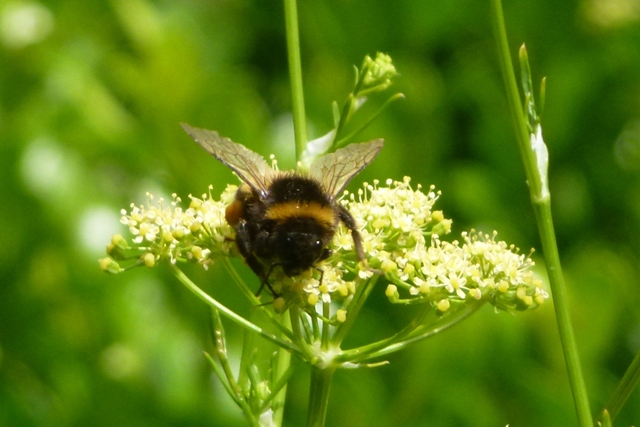 Later in the season the nest will start generating unmated queens (or gynes) who, after mating, will become the following year’s queens. The gynes are feed more during the larval stage to assist their development and give them their increased size. At roughly the same time the queen and possibly some dominant workers will lay unfertilised eggs, which will develop into smaller males.  Males do not collect pollen for the nest, and quickly leave to find a gyne to mate with. Gynes will also leave the nest to mate but will return to build up fat reserves necessary to survive the winter. Finally, the young queens leave the nest to find suitable over-wintering holes, and the cycle begins again the coming spring.

Bumblebees are not constrained by the same sort of weather conditions that honeybees are. Bumblebees will fly at temperatures above or around 5˚C. Honeybees generally require temperatures to be above 15˚C. Bumblebees will also forage on windy, low-light and overcast days, or during light drizzle, when honeybees stay at home. The larger size of the bumblebee enables them to manipulate flowers more efficiently, which means that they generally spend less time on the flower (while providing more effective pollination), and can service more flowers per hour. So, a bumblebee will start foraging earlier and stay out for longer than a honeybee, forage on days when the weather is less than ideal, and is more efficient while doing it!

When a bumblebee flies it creates an electrostatic charge across its body. During a flower visit the pollen from the anther is electrostatically attracted to the hairs on the bumblebee’s body and transfers on contact. When it moves from flower to flower, some of the pollen is rubbed off the bumblebee and onto the stigma. This normally happens through direct contact, but the now statically charged pollen may also jump short distances to the stigma.  Bumblebees perform also “buzz pollination” as an efficient way to extract pollen. In some flowers (like tomatoes or blueberries) the pollen is held inside pollen tubes that prevent its collection in the usual way. Bumblebees shake the pollen free by buzzing, grabbing hold of the flower and vigorously shaking its body, causing the pollen to be released. 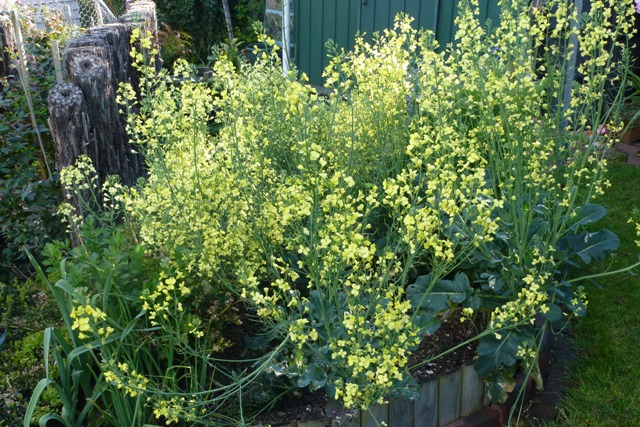 As well as planting lots of bee-friendly flowers and letting my herbs and some vegetables flower, I also bought a bumble bee nesting box from Creative Woodcraft:

The bumble bee nesting box comes ready for use and complete with nesting material. Successful occupation of the nesting box depends upon correct siting: surrounding terrain should be well-drained, protected from excessive winds, shade or heat, and a site against a tree or building aids the bee’s orientation. Least successful locations are facing south or placed underneath pine trees.

Despite siting my nesting box according to all the instructions(facing east against my magnolia tree), I haven’t seen any evidence of it being used but maybe it will be sometime and I like to think I am doing everything I can to encourage these amazing creatures to make their home in my garden. 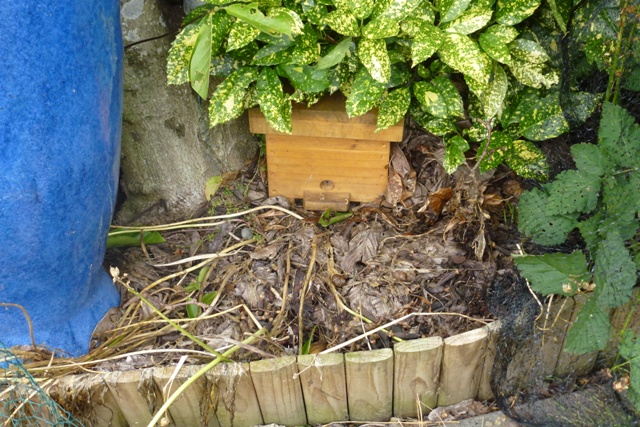