We start the day on the coast and then head to the Grampians National Park, stopping to see more wildlife and experience some aboriginal culture along the way. Then we climb to The Pinnacle for spectacular views.

Kelly picks me up again at 6.30 am to join the others for breakfast at the backpackers before setting out on the next leg of our adventure – heading towards the Grampian mountains. Our first stop, just as the sun is rising, is a Little Penguin colony on the coast. They had a problem with fox predation and extermination efforts were foiled because the foxes could get across to the island at low tide. A farmer then had a plan to use Italian Maremma guardian dogs, usually used for protecting sheep from wolves. The dogs bonded well with the penguins and protect them; since then there have been no foxes on the island. We weren’t able to actually visit the penguins which was a pity but we were able to go on a beautiful walk around the coast looking at other wildlife, the rocks (with caves), sea and a mass of rock pools. 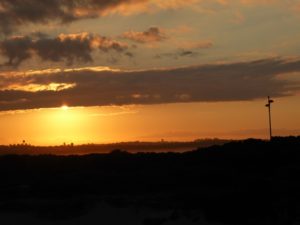 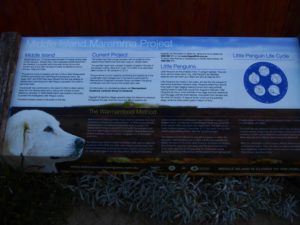 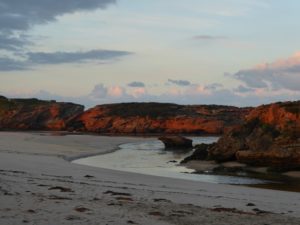 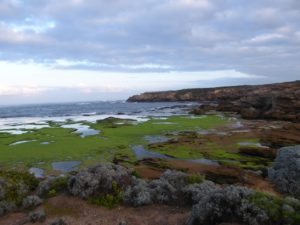 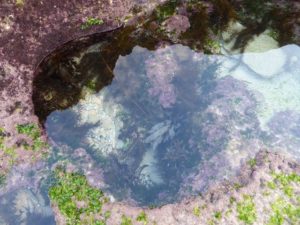 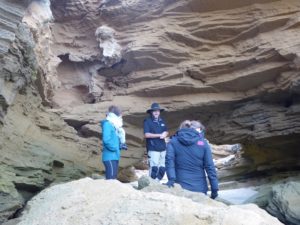 Then we headed inland towards the Tower Hill Reserve which is inside the crater of an enormous volcano. It has large lake areas and then there is a tongue into the middle which was formed by another smaller volcano inside the first. The area was cleared for farming long ago and wasn’t thriving. Then someone discovered an 1855 painting that showed the area in beautiful detail that enabled them to identify the plant species. Almost 100 years later the area became the first national park and was re-afforested and the wildlife re-established. It is now a wonderful sanctuary and houses an aboriginal cultural centre as well. We first have a look at koalas, emu, wallabies, kangaroos and numerous birds that abound in the area and then head out on a ‘journey to the last volcano’ which is a beautiful hour’s walk around the smaller volcano.
Then it is back to the cultural centre where we we have a lesson in boomerang throwing (it takes a lot of practice!) and a didgeridoo demonstration.

Koala safely back in tree

Journey to the Last Volcano

We have a few hours drive now heading towards the Grampian Mountains – with a few stops to photograph these amazing formations in the distance far ahead in the distance along the long straight roads. There were so few cars that we even lay down in the middle of the road for photos. After a quick late lunch we headed to the Brambuk Bushfood Cafe and visitor centre where chef Blake introduced us to various bush herbs and spices. We tried kangaroo and crocodile meat (deliciously tender) but unfortunately emu was off the menu. We also had some lemon myrtle scones with a wattle seed cream. 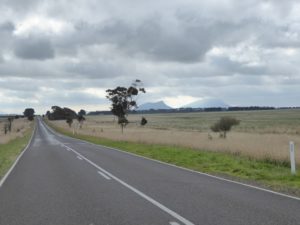 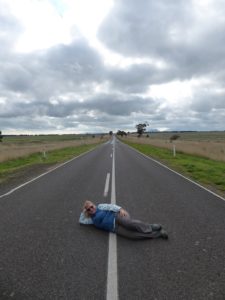 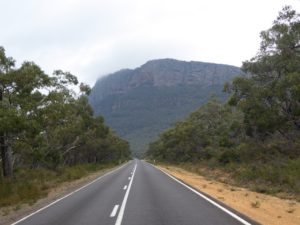 Getting closer to the mountains 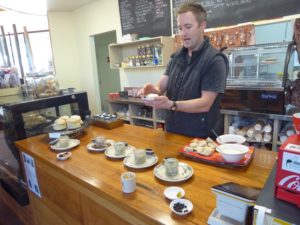 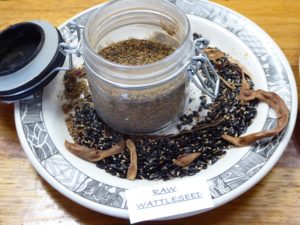 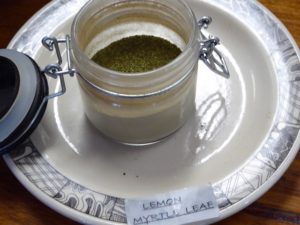 Suitably fortified we headed off for an afternoon climb up to the Pinnacle – towering above the visitor centre. We were a bit concerned about the climb but the mountains are formed from big slabs of rock leaning on an angle so if you get around the back of them the climb is a lot less steep than when viewed from the front. But it was still pretty steep in places. The scenery was stunning and there were all sorts of interesting caves, rock formations and outlooks along the way. Nearer the top is ‘Silent Street’ – a narrow chasm with steep steps so everyone goes quiet while climbing up. Once we get to the top, the view is absolutely spectacular and the climb was instantly forgotten. As it is nearly winter, we are losing daylight quickly so we have a quick trip back down, taking in sunset on the way and getting back to the car park just as it gets dark.

The tip of the Pinnacle

The view from the top

Coming down as the sun was setting

Coming down as the sun was setting

We stop at the store to pick up supplies for the evening and head to the Backpackers at Hall’s Gap – tonight everyone is sleeping in the dormitory. It is very comfortable with a big fire going in the lounge. Kelly fires up the barbeque and we help with the salads – a perfect meal after our exertions. Then we head out the back and sit around a large fire pit with our beverages, watching the stars and see the moon come up. We play ‘2 truths and a lie’ (you have to say 3 things about yourself – 2 of which are true and one that is a lie and the group has to guess which one is false) – it is a great way to get to know the others in the group.

Some stay up late into the night but most of us are in bed around 11.00 but it wasn’t a peaceful night for those not used to sleeping with 14 other people!

I had also made the mistake of trying some “goon” (I now know that a goon bag or goon sack is Australian slang for cheap box wine – this was a sweet white variety) after the nice wine I had shared with Luta and Eleza, and I was unimpressed to have very weird random dreams that night.