This year there has been a significant change in my garden as I continue my quest in creating a backyard haven outdoor living area. One of my very first blog posts was about A Changing Garden and showed how my garden has evolved over the years. I mentioned then that another reinvention was still underway. In the 3 years since then I have focused on developing the productive, edible parts of the garden, putting in vegetable gardens and planting fruit trees in the borders. But there wasn’t a great deal of change to the structure of the garden that was established 25 years ago when I had a landscape designer help me create a back garden with flowing curves. 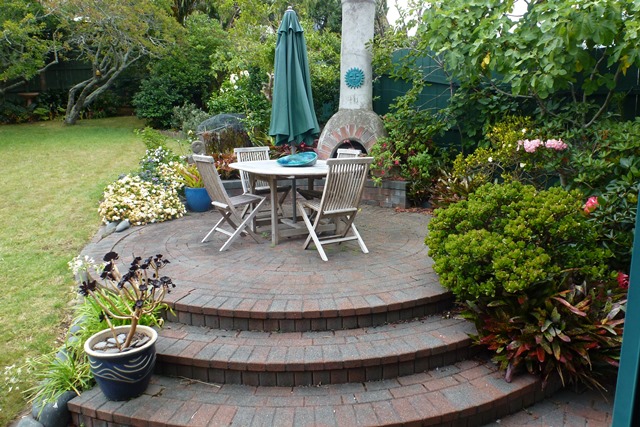 My outdoor area at the beginning of the year

That has changed over the last year as I have focused on the ‘outdoor living room’ aspects rather than the edible aspects of the garden. I have long had a patio area in a lovely sunny spot but have been reluctant to put any nice garden furniture there until it could be covered and protected from the elements. Therein lay the main problem: because the patio area is up a couple of steps from the back of the house, if you put a roof structure out from the eaves in the usual way it would only be head height (even for me) when it got to the patio area. I could never figure out how to address this issue but this year I was determined to find a way to make it work.

I started off asking a range of awning and canopy companies to come and have a look at the site, firstly to tell me whether it was possible and then suggest the best approach to solving the issue. We determined that it was indeed possible and there were lots of different ways of going about it, from using a bracket to step the roof height up above the guttering to having a curved or sloping structure.

Then came the next issue: as this is the sunniest part of the property and links into my main living space, I didn’t want to cut out any more light into the house than I absolutely had to so it would need to be made of a clear material (and I hate the traditional corrugated plastic roofing sheets). Polycarbonate sheeting was definitely a possibility but was relatively expensive and couldn’t be curved. Glass is also expensive and couldn’t be curved either and is heavy so would require a much stronger framework.

I asked if I could go to visit houses that had similar structures so that I could see what they were like – most had corrugated plastic sheeting and confirmed my dislike of it. Even the tinted corrugated sheets still let through huge amounts of heat and I wanted it to be clear. My friend Doreen invited me to go and see her brother’s outdoor area that had a similar aspect on the north side of the house. He has a gabled structure with glass panels and it is beautiful: it is so light and airy, the view through the glass is crystal clear and even in the middle of the day it was not sweltering underneath. I was hooked. I decided that I would get a glass gable structured canopy even if it was (much) more expensive and got the details for EzyDeck, the company that had installed his canopy.

The lovely Laura Budd from EzyDeck came round the next week, looked around the back garden and said “that’s far too complicated a structure for your lovely garden – you just need something simple!”. So she suggested a suitable simple structure that would be straight so I could have polycarbonate or glass if I wanted. She then said that there was a new product just about to be released that was a corrugated plastic but the corrugations were very far apart and could be hidden by the rafters so that it appeared flat from underneath (it was also thicker than the usual sheeting cutting out 99% of UV light). She thought it would be perfect for what I was looking for and much much cheaper than polycarbonate or glass – and she would arrange to drop off a sample for me to look at.

It seemed perfect so she drew up some formal plans for a quote and was able to make and suggest changes easily as we explored various options – nothing was too much trouble. They could also do the plastic roll down blinds that I was thinking about for the most exposed side, and she found a shade system that was almost identical to what I thought I would need to have custom designed – and could order that for me as well.

I had to find a garden designer as well to make some changes to the garden area around the patio first so that we could get the final measurements for the canopy. As long as the canopy area is less than 20m2 you don’t need to get planning consent from the local council – mine is 19.95m2! I got Chris Dearsley from Kings Gardening Services to come and demolish the old retaining wall and fireplace so that it could all get started. 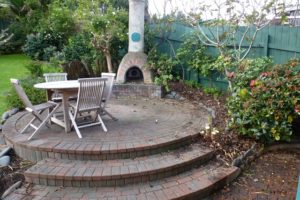 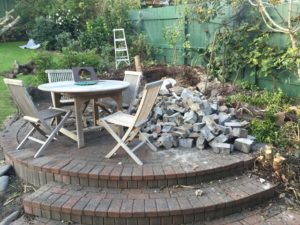 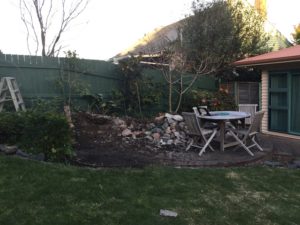 And the retaining wall

After the demolition, the roof got installed. Then Chris had to come back to build new retaining walls and add pavers to the slightly expanded area (it is amazing how much bigger the space looks just have corners added to the previously circular area). And then come back to add more retaining to make a much neater finish of the sloping space than I’d coped with for the last 25 years. Of course all of this was delayed multiple times by the awfully rainy winter we had. 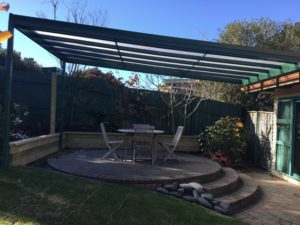 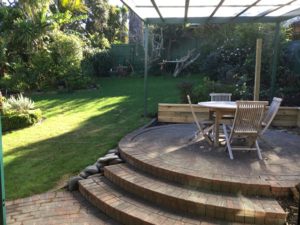 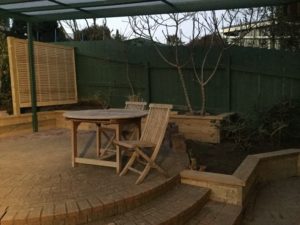 Once that was done, Laura could come back to measure up for the blinds and the Wave Shade system. Of course by that stage I had decided that I really needed to have blinds on 3 sides as the rain came in a long way under the canopy area. This cost more than I had originally anticipated so I decided that I’d have to wait to get the outdoor furniture that I had had my eye on for the past 5+ years. But something kept telling me to go and check out the furniture anyway – and I discovered that the company were stopping importing this brand and were having a 25% discount sale on the remaining items. Thankfully they did have all the pieces that I wanted (one was the very last that they had) but I did have to purchase them then and there or miss out for forever. 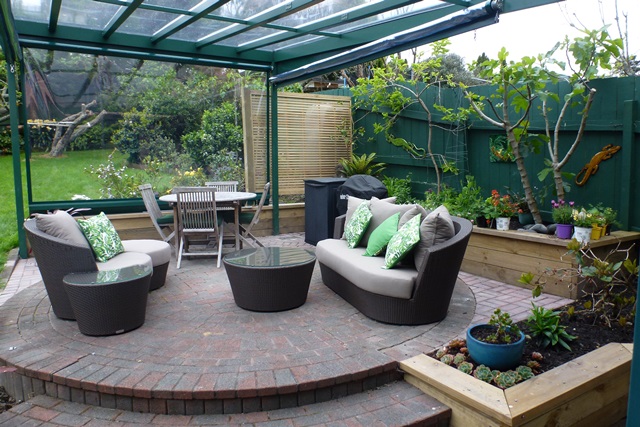 Ready for a Staycation 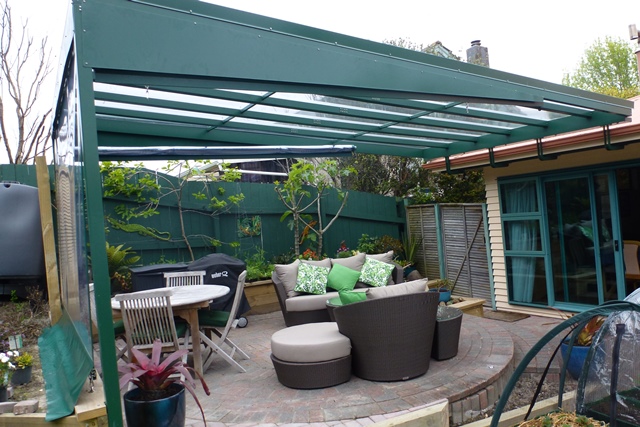 With furniture in place, cushions installed, and barbeque at the ready, I feel that I am very well set up for a Staycation at home this summer – relaxing and entertaining. But then of course I need to paint the trellis and do more planting …

Whilst I was at it, I decided to keep going with renovating the garden and providing more usable spaces but I’ll write about that in another post.