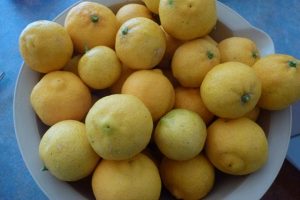 I have previously shared my Brandied Lime Marmalade recipe and my earlier not so successful attempts. Each year I get lots of limes on my tree so I’ve been hoping to find a recipe that would give me a fresh and zingy lime marmalade that wasn’t too sweet but also not too tart and bitter. Success! I am really enjoying the results of this recipe.

This month’s NZ Gardener magazine had a feature on marmalade – trying to increase its popularity. Apparently the younger generations have not been exposed to delicious marmalades and are put off trying because off the backlash against sugar. In my friends and family circle, marmalade (particularly my Grapefruit Marmalade) remains the single most popular element of my ‘gift hampers’ and I’m often asked to increase the quantity so there’s no issue there.

They had a recipe for a quick-set marmalade that I nearly overlooked until I read that they used it for making lime marmalade because ‘the end result tastes infinitely better. A long boiling tends to wallop all the fresh zestiness out of limes, resulting in a sickly spread instead of a sharp aromatic one.’ It uses jam-setting sugar that is often used in making jams with fruit that are low in pectin (the gelling agent that makes jam firm) – see Quick & Easy Berry Jam. Limes are high in pectin but making it this way means that you don’t need to boil the marmalade for very long.

Blitz the citrus whole in a food processor until roughly chopped (not completely pulverised!). My limes tend to have lots of seeds so I cut mine in half and removed the seeds before weighing them. 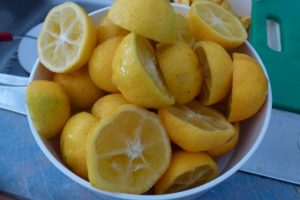 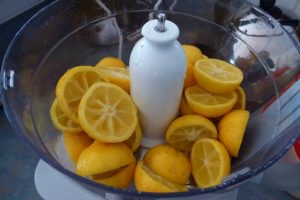 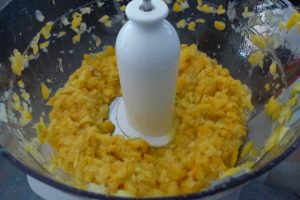 Place the citrus pulp in a preserving pan with the hot water. I also added a few torn kaffir lime leaves tied in a muslin bag to give it another layer of lime flavouring.

Bring to the boil and add jam setting sugar, stirring until the sugar has dissolved. 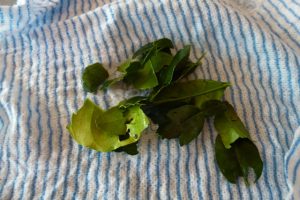 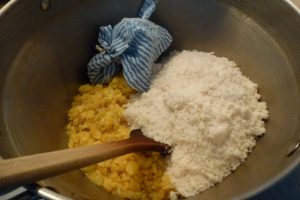 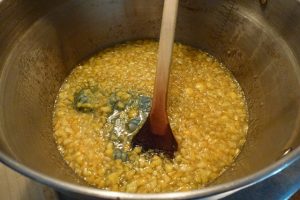 Boil hard for 5 minutes, without stirring, then pour into hot sterilised jars and seal. I added a few drops of green food colouring to make it look more ‘limey’ and different from my other marmalades. 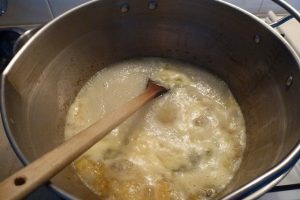 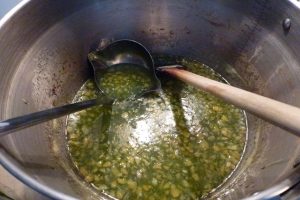 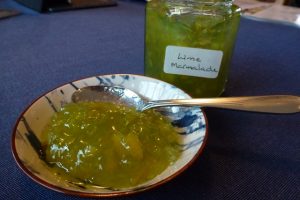