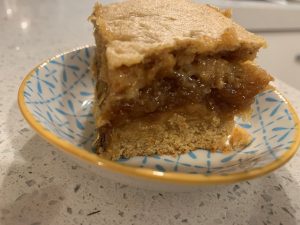 I have never had a ‘Fig Newton’ but I have heard them referred to in books and movies and something about the name just took my fancy. In reality the name ‘Newton’ relates to the trade marked extrusion process that is used to create the flattened roll of sweet pastry filled with fig paste (or other fruit paste) that is cut into the commercially available biscuits – so not that fascinating after all.

It seems that there is quite an art in making the perfect roll of fig filled pastry but I figured that it would taste the same and be a whole lot simpler to make them as a Fig Slice.

You can make the filling from dried figs, fresh figs or use fig jam or fig paste you have made previously. As my fig tree produces copious fruit, I decided to make it with fresh figs (well actually frozen ones as I just put the fresh ones in the freezer when they are ripe until I have enough to make something with. They ripen so quickly that it is a fine line between ripe and rotten otherwise.)

In a medium-sized, heavy-bottomed saucepan, make the filling. Bring the figs, 1/2 cup brown sugar, lemon zest, and 1 teaspoon vanilla to a low boil, stirring as needed.

Reduce the heat and simmer for 40-50 minutes, occasionally smashing the larger pieces with the back of a fork and stirring. They will cook down and thicken with a jam-like consistency.

Remove the filling from the heat and cool completely. You can make ahead of time and store in the fridge for a few days. 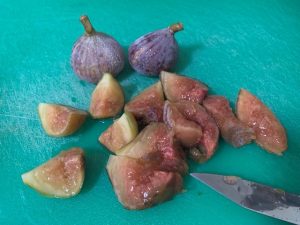 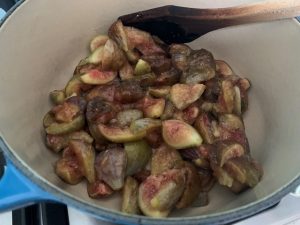 Chop and place in pan 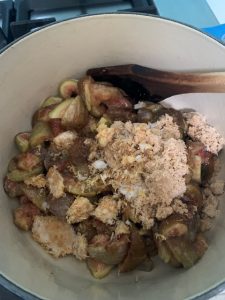 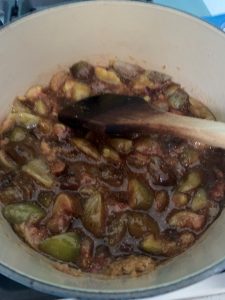 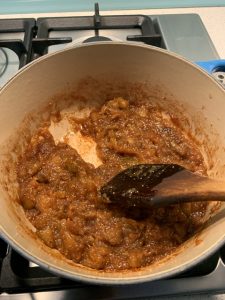 In a food processor, cream the butter and brown sugar. Add the orange zest, vanilla and eggs and beat until fluffy.

Add the flours, baking powder, and salt to the food processor. Mix until well combined and the dough is sticky.

Split the dough into roughly two halves and spread into the 2 sandwich tins. It is really difficult to spread because the dough is so sticky but push it in as well as you can using the back of a spoon and then use a knife to spread it as smooth as you can.

Put one of the sandwich tins into the freezer (it will be your top crust).

Put the other sandwich tin into the oven and bake at 180C for about 20 minutes until golden brown.

Take it out of the oven and spread the fig filling over the baked base. Get the top crust out of the freezer and turn it out on top of the base, gently peeling the baking paper away. Because it had been so difficult to spread, mine hadn’t quite gone to the edges but it doesn’t really matter and it will spread a little as it cooks.

Bake for another 25-30 minutes until the top turns golden brown.

Let it cool completely in the pan. Once cooled, lift the slice out of the tin and cut into squares. 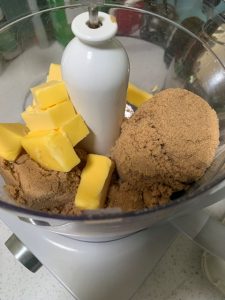 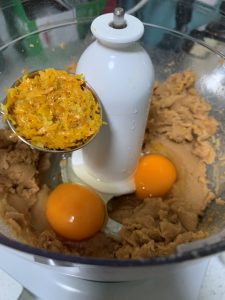 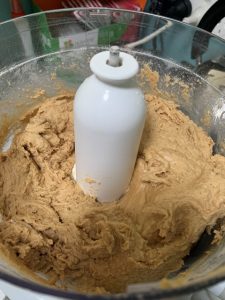 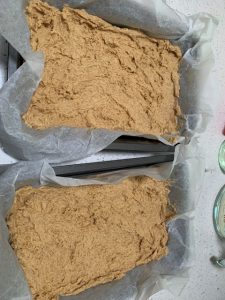 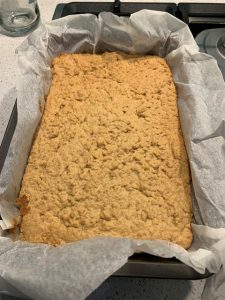 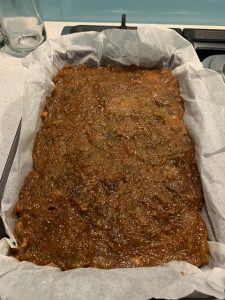 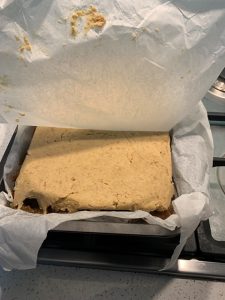 Top with second half 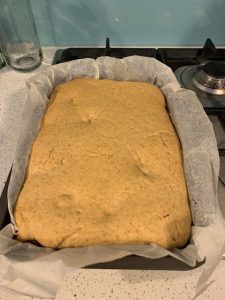 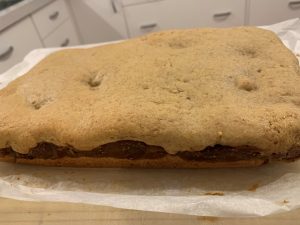