I have always liked the idea of making my own ginger beer but I’ve heard so many stories of exploding bottles that it put me off so far.  I have been making a range of ciders and ales using a brewing kit from Mad Millie, and I was thinking I should contact them to see if they could do an ‘idiot proof’ ginger beer. Imagine my surprise when I went on line to get their contact details to discover that they had beaten me to it: there was a Gluten Free Alcoholic Ginger Beer kit in stock.  I would have preferred a non-alcoholic ginger beer but decided that it would be fun to give this a go.

The ‘tasting notes’ describe it as “a burnished golden pour with a fluffy white head. The biscuit malty character comes through with a sweet and subtle bitterness followed by a kick of fiery ginger”.

You make the brew in almost the same way as you do cider or ale – in fact it was so similar that they didn’t include separate instructions for it and it was a bit confusing whether you were supposed to follow the instructions for cider or ale.  And to confuse matters more, it coincided with a decision to not include some of the things in the kits that they used to.  I finally figured it out after talking with the Mad Millie helpline and gave them feedback that I was really glad this wasn’t my first brew that I had tried.

In the same way as their other kits, you add 1 litre of boiling water to your fermenter and stir in the contents of the two pouches (‘ginger syrup’ and dextrose).  When dissolved, top up to 10 litres with cold water.  Then stir in the yeast and a sweetener sachet (if desired – I didn’t).  Leave it to ferment for 7-10 days at 18-28C – use a heating pad if you need to. 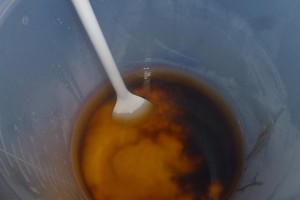 To boiling water in fermenter 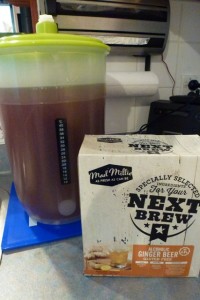 Top up with cold water, stir in yeast and leave to ferment 7-10 days

Check the Specific Gravity (SG) using the hydrometer/bottling gauge.  The SG is a measure of whether or not the yeast has used up all the available sugar and stopped fermenting.  If you simply bottled it now, the ginger beer would be flat so you need to add a small amount of sugar for secondary fermentation in the bottle – just enough to give it some fizz.

Add two teaspoons of sugar to each 750ml bottle for secondary fermentation. Transfer the ginger beer to the bottles using the siphon.  Leave it to mature for 3 weeks: leave the bottles in the same warmer place that you brewed in for a week to allow it to continue to ferment and then transfer the bottles to a cool dark place.

The finished result is true to the description above.  I was disappointed because it doesn’t have a strong ginger flavour but it does have a spicy ginger kick to it.  It is a pleasant enough drink but I don’t think I will make it again.  I will seek out something that tastes more gingery and is non-alcoholic. 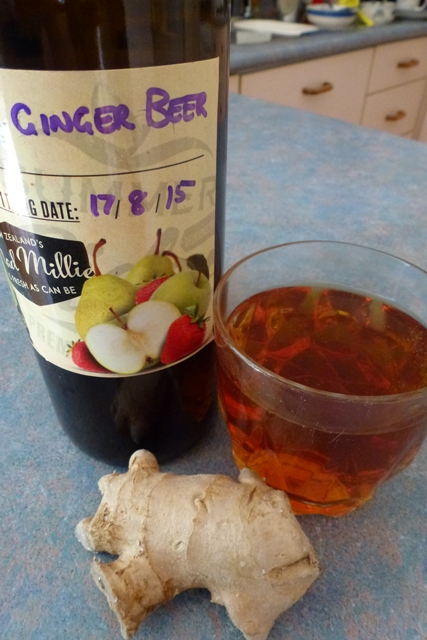