Last year while I was visiting England, I was lucky to have a personalised London walking tour with a guide who had worked in London for many years. Gill and I were staying with my godmother Sue and her husband Chris, and Sue and Gill were going up to London for a reunion with several of their school friends. Chris volunteered to show me around some of his old haunts.

Our first stop was the Shard. The Shard is the tallest building in England (built since I was last in London) and therefore the highest view you can get. Gill and I had tried to visit the Shard on an earlier day trip up to London to see a show (The Curious Incident of the Dog in the Night-time at the Gielguid Theatre) but had been foiled because of a royal visit that had closed off the entire area around the Shard, we tried multiple entrances in to no avail). You can go to the viewing platform on the 72nd floor but it will cost you £25 just to get up there. For those in the know, you can go up (for free) to a bar or restaurant and still get a fantastic view. We went to the Gong Bar on the 52nd floor: there was a minimum spend of £30 per table but you could get a table by the window and stay for up to 1.5 hours. £30 was a ‘bit more’ than the cup of coffee we were thinking of would have cost so we decided to celebrate the occasion with champagne (with complementary nibbles). We ended up talking and enjoying the view for rather longer than anticipated which threw Chris’ plans for the day out of kilter but it was very enjoyable to spend that time with him.

Champagne at the Shard

Then we caught the tube to Temple Station for the start of my walking tour. We headed east towards Temple Gardens at the centre of the Inns of Court area. Temple was originally the precinct of the Knights Templar and the Temple Church (built in the 12th and 13th centuries). Middle Temple and Inner Temple are now two of London’s four Inns of Court – or professional societies for barristers. The Inns each have their own barristers chambers as well as gardens, dining halls, libraries and administrative offices. Until the twentieth century, many of the chambers were also residential accommodation for barristers but a shortage of professional rooms has meant this is limited to a very few in the top floors and for very senior barristers and judges.

We take the King’s Bench Walk and then some alleyways to the back entrance of the Lloyd’s Bank Law Courts branch – opposite the Royal Courts of Justice. At that time it was an operating branch (and Chris needed to get some money) but it closed in August this year. It was the most amazing bank I have ever seen! with the interior covered in magnificent Royal Doulton tiles commemorating the history of the site. It was built in 1883 as a restaurant, which unfortunately failed (twice) within a few years of opening. The building then stood empty until it was bought by Lloyds Bank in 1895. It includes a portrait of the Palsgrave Frederick – the failed restaurant was named in his honour. Frederick, later King of Bohemia, was married to King James I’s daughter, Eliza.

After a quick lunch in a delightful little tucked-away restaurant, we went to the British Museum and visited The King’s Library (now holding much more than just books). We only had a relatively short time to visit on this occasion because we were due to meet with Gill and Sue to visit the St John Soane Museum where a friend of theirs works. It was the home of 19th century architect Sir John Soane, now a national museum with a “world class collection of art, antiquities and drawings”. We ended up not going in but had afternoon tea in Lincoln’s Inn Fields park.

Then we walked down Kingsway, past the London School of Economics and Political Science, along The Strand and down to Trafalgar Square, then along The Mall past St James’ Park to the Royal Society Building. Sue and Chris support a number of medical research organisations and we were invited to an evening function to hear the latest in cancer research. 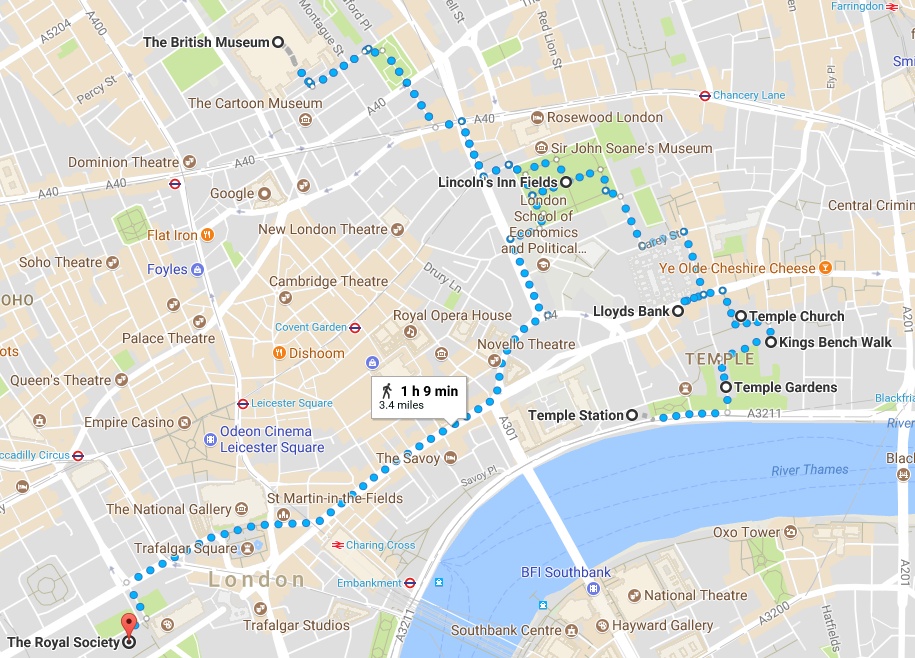