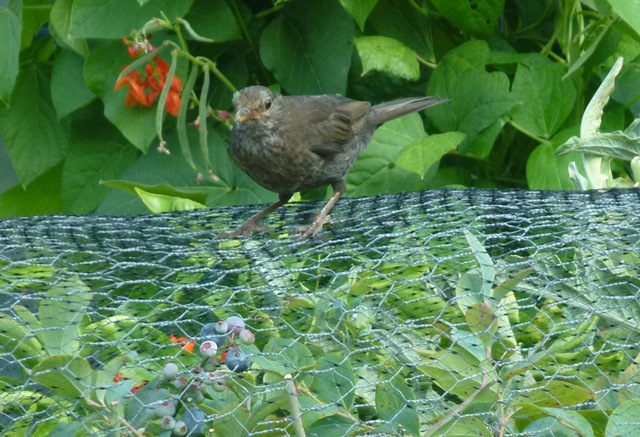 There must be another way to get those blueberries!

I replaced lots of my strawberries this year and tried growing some of them in self-watering pots that were a lot easier to net to keep out the birds but left other strawberry plants growing under the apple and citrus trees with the intention of sharing them with the birds. This seemed to work quite well: although a determined bird could have worked its way under the strawberry netting, they seemed content with the ones I left for them.

I had a wooden frame built over one of my gardens to make it easier to net the raspberries. Previously I had erected a makeshift netting structure that worked well for the first flush of raspberries but the canes grew so fast that they became a tangled mess growing through the netting before the first raspberries had finished. With my new structure I can drape bird netting right over it and have put a series of small nails down the sides so that I can easily hook the netting on and off to pick the berries, and it is high enough that it (mostly) doesn’t restrict the canes. Just as well, because it has been such a good year for berries that they have been fruit continuously for months. The netting frame structure has been working really well and only once, when a storm had blown part of the netting aside, did I have to shoo a couple of waxeyes away from their fruity feast. 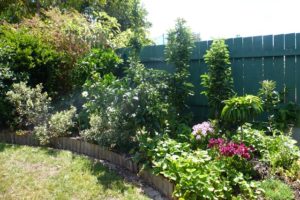 Strawberries under the fruit trees 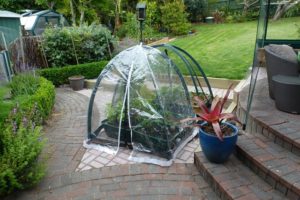 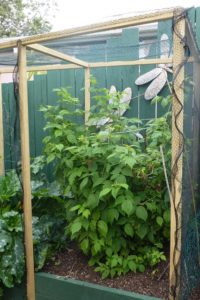 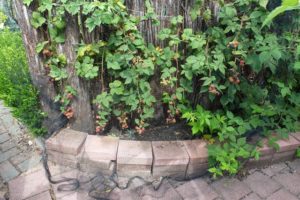 My blackberries are also having a bumper year with berries ripening two months before they usually do and seemingly keeping on producing. I have just draped some bird netting over the ponga fence and the blackberries growing against it. I’ve tucked it in around the edges but there are areas where an enterprising bird could possible get through – there are gaps appearing between the ponga logs and I haven’t (yet) weighted down the bottom of the netting. A couple of berries have been pecked at through the netting but otherwise they have been left for me to harvest.

And then there are the blueberries … I’ve written previously of my efforts to stop the blackbirds beating me to the blueberries: by putting netting on them before they ripened to stop the birds picking them off one by one just as they were coming ready so that I didn’t realise they were ripening and then having to add bird scaring tape because they were still managing to find a way to get the berries. It was eventually very successful and I got a large crop of blueberries last summer.  This summer was shaping up to be even better – I have never seen so many fruit on my blueberry plants – and was really excited when I picked my first bowl-full of blueberries that were fully-ripened on the bushes. It seemed my netting and bird scaring tape was doing the trick. I’d had to replace a couple of blueberry plants nearby and left them uncovered so that the birds could have a few berries as well. 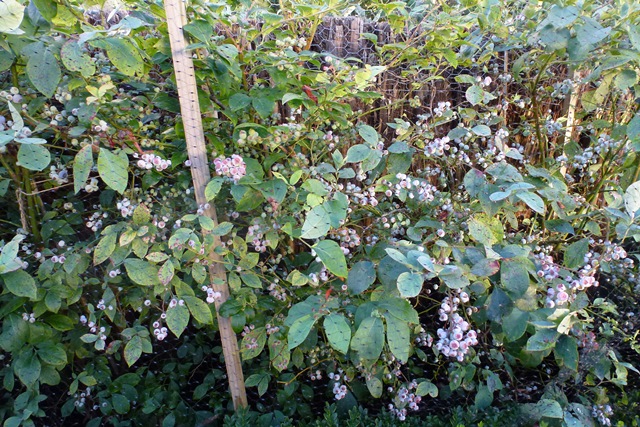 Promise of a bounteous blueberry season 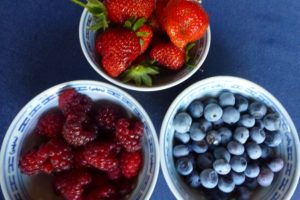 First crop of berries this year 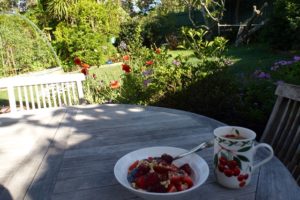 Berry breakfast in the garden

But the next week when I went to harvest my crop, there were no ripe blueberries. That was a bit odd, maybe it was just the weather slowing them down a bit I thought. The next week I surprised a blackbird who was inside the netting and had to let it out, and readjusted the netting although I couldn’t see anywhere it could have got in. Still no ripe berries. Then a noisy blackbird on the top of the wire netting alerted me that its mate was inside the netting. Again I let it out and carefully secured the edges of the netting. Next day I spotted another blackbird inside the netting but when I went out there it escaped out the back somewhere – not getting surprised by me any more and just nonchalantly going back out. I didn’t think a blackbird could squeeze through the gaps appearing between the ponga logs as they aged but it must have. So I got some more wire netting and ran it out all the way along the back of the ponga fence behind the blueberries, thinking ‘right! got you this time’. I finally got to see some berries ripening – and let my guard down. When I went out to pick them they had gone!! Where on earth were the birds getting in? I thought perhaps they were managing to get under the netting where it was draped over the box hedging so I got some more wire netting and put it around the edges where I’d seen the blackbirds exploring. And I had to bend the wire netting outwards because it was providing a good perch for pecking at the berries through the bird netting. This was getting ridiculous. Still no ripe berries except for the few on the unnetted new plants!

A week of total frustration and then I happened to see a blackbird sneaking out from under the corner of the box hedge. So I boarded up the hole (which wasn’t very big) and checked that there were no other holes. Surely I must start getting my harvest now! I started to see berries ripening and, although I wanted to leave them a bit longer to fully ripen, I picked a small bowlful thinking that if I removed temptation the blackbirds would go elsewhere. No such luck! I then discovered that they had essentially dug a hole: pushing away all the bark so that they made another hole under the hedge. I have now put barricades all the way along the bottom of the hedge and have just harvested a bowl of plump ripe berries from my now very diminished crop. Here’s hoping that I’ve finally outsmarted the blackbirds and that they won’t keep learning new tricks for next year. 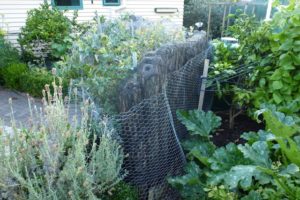 Wire netting at back of blueberries 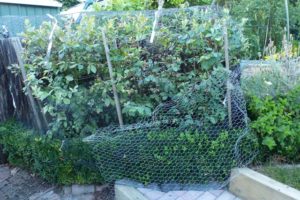 I made berry desserts for Christmas this year but unfortunately I had to buy the blueberries. 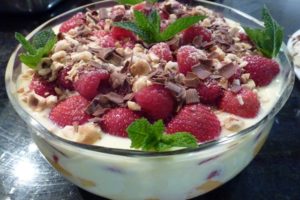 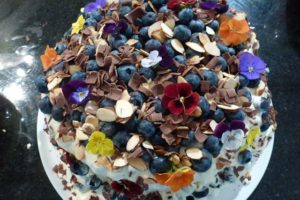